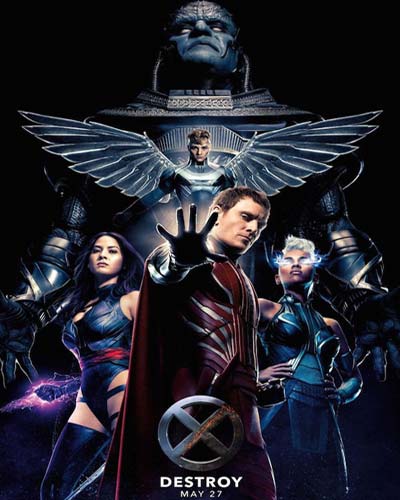 [tps_footer]Hollywood’s most awaited film of the year is ‘X-Men: Apocalypse’. The trailer released last year that was absolutely mind blowing. Yesterday, a new poster for the film was unveiled that focuses on the major villains in the film.

The new poster titled ‘Destroy’ presents the villains of the movie who will fight the X-Men. The new promotional image presents Apocalypse (Oscar Isaac) looming above the four horsemen- Magneto (Michael Fassbender), Psylocke  (Olivia Munn), Storm (Alexandra Shipp) and Angel (Ben Hardy).  With the four mutants by his side, the Apocalypse is ready to rebuild the 1980s civilization according to him that will wipe out humanity.

The four horsemen aka the mutants have unique powers. Magneto is the master of magnetism, Storm can control the weather, Psylocke’s telekinetic and telepathic abilities go hand-in-hand with her swordplay and Angel’s flying abilities gets enhanced when his wings are coated in metal.

If you have followed the films religiously then you’d know that in ‘X-Men: Days of Future Past’ post credits, the Four Horsemen were seen watching over the young En Sabah Nur . He, later, renamed himself as Apocalypse.Now, that the four mutants will be serving him, things can be predicted. But, the timeline was tampered with Wolverine visiting the past in ‘X-Men: Days of Future Past’, so the future may not be the same as we have seen in earlier films.