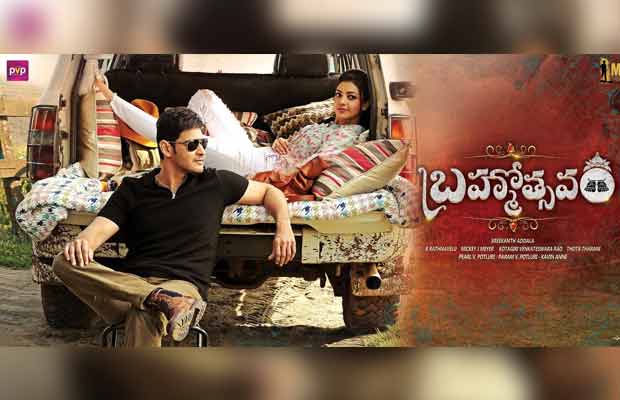 [tps_footer]Mahesh Babu and Kajal Aggarwal will soon flaunt their chemistry in the film ‘Brahmotsavam’. The film is much in the limelight lately with its motion poster and song teaser unveiled. The superstar of the Tollywood industry Mahesh Babu is already making the masses go drool with his charm and élan in the glimpse of the film. The just released poster of the film not only sees the handsome hunk but also features gorgeous actress Kajal Aggarwal.

‘Brahmotsavam’ will see Mahesh Babu and Kajal Aggarwal’s tricky bond and the film also has two other leading ladies namely Samantha and Pranitha Subhash. The movie poster sees Mahesh Babu and Kajal striking a stylish pose and the poster is very entertaining as it has loads of surprising elements.

The two actors are seen with a big vehicle wherein Kajal is sitting on the back of the vehicle with a comfy bed and Mahesh Babu is seen in a dashing avatar with shades on. The scenario is surely raising the curiosity levels. Kajal Aggarwal in her simple attire also, speaks volumes with her expressions. The chemistry between the two characters is already evident in the poster.

The film ‘Brahmotsavam’ is directed by Srikanth Adala. The much-awaited movie is all set to release on May 20th, 2016. Apart from the poster, the song teaser of the track Madhuram Madhuram has been released and the motion teaser is released.[/tps_footer]