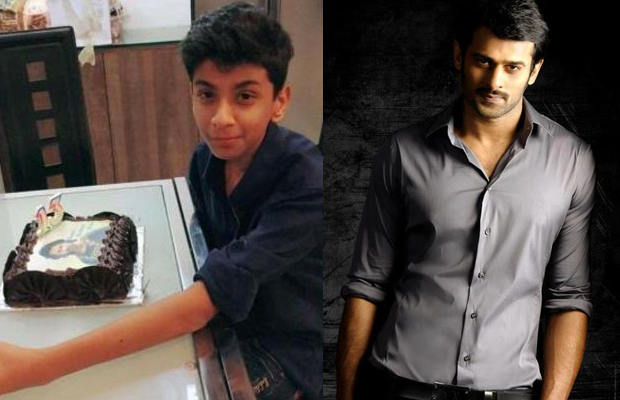 Prabhas, who is praised by all and specially for his character in Bahubali encountered a fan who had his birthday cake with Prabhas‘s picture on it.

Bahubali aka Prabhas has left no stone unturned to make his way in children’s heart and in no time has become their favourite character of all times. Prabhas who became a national star soon after the mega success of Bahubali has in no time gathered immense popularity amongst kids.

Recently, a young boy had a wish on his birthday that he cuts a Bahubali birthday cake with Prabhas‘s picture on the cake. The kids parents readily arranged for this cake and made sure that he was surprised. Here’s a picture of the birthday boy who celebrated his birthday last week and seems extremely happy with his birthday cake!

The young fan Aryan who turned 11 years old recently celebrated his birthday with a cake that had Prabhas’s picture on it. The Bahubali star when learnt about this was touched by the cute gesture of this young fan.

A source says, “Prabhas is really touched by the gesture“.

The actor has also encountered a lot of fan mails expressing their love and the wish to meet Bahubali Prabhas in real life someday.

Prabhas is happy to know that his audience comprises children, because he plans to come up with Bahubali merchandise. The actor and the entire team of the film has taken this conscious decision to bring something new for the young fans.

A source says, “Fans anyway are eagerly waiting for the second part of the film to hit theatres. The sequel is in the making, but the buzz is strong. Kids can expect games, toys, collectibles and what not,”

Prabhas‘s fan following has no age bar, fans from all over the nation are seen deluging immense love for the actor. From female fans to young boys to kids, the actor has spread his magic across everywhere! The film that has created thundering box office numbers is currently working on it’s sequel.

Audiences are highly anticipating for his forthcoming movie Bahubali 2 and just cant wait to watch the film and finally learn the reason as to why did Kattappa kill Bahubali, one of the most biggest suspense that the film has generated.