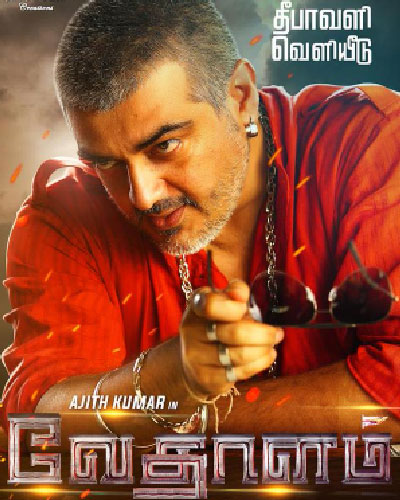 After announcing the film’s title as ‘Vedhalam’, Ajith Kumar had set the Internet ablaze with excitement. Now the actor’s first look from the film has left Thala fans in an uproar of amazement! The first official poster of ‘Vedhalam’ has been released marking actor Ajith Kumar‘s 56th film. We can see the actor in one of his trademark avatars looking dashing as ever. Naturally Ajith fans made it a point to spread the poster like wildfire making it trend on social media.

The actor can be seen donning a red kurta with a ragged look, wearing steel accessories all over. From a big chain to bracelet to rings all over his fingers and aviator glasses in his hand, Ajith Kumar’s look screams boldness. The powerful impact created by the poster itself suggests that Ajith will be seen in his staple hunk image. Audiences can expect power packed action sequences from ‘Vedhalam’.

The title ‘Vedhalam’ has probably been adopted from the famous Indian tale ‘Vikramaditya Vethalam’. Vethalam translates to Ghost in English which hints towards Ajith Kumar’s rough image in the film. Plot of the film has been kept under wraps. Much like Thala 55 that is Ajith Kumar starrer ‘Yennai Arindhaal’, Thala 56 – ‘Vedhalam’ has become a highly anticipated film already! The film also stars actresses Shruti Haasan, Laxmi Menon and actors Aniket Chouhan, Kabir Singh among others.

Social media has been trending with both ‘Vedhalam’ as well as ‘Puli’ since days. Both the actors Vijay and Ajith Kumar have their own loyal fan base who often engage in fan wars. The Tamil industry gets a huge boost just because of the audiences’ dedication towards their favourite actor/actress. ‘Vedhalam’s’ official poster and ‘Puli’s’ official trailer has set the bar higher. After the attractive first look, we are patiently awaiting the trailer of ‘Siruthai’ Siva’s ‘Vedhalam’.