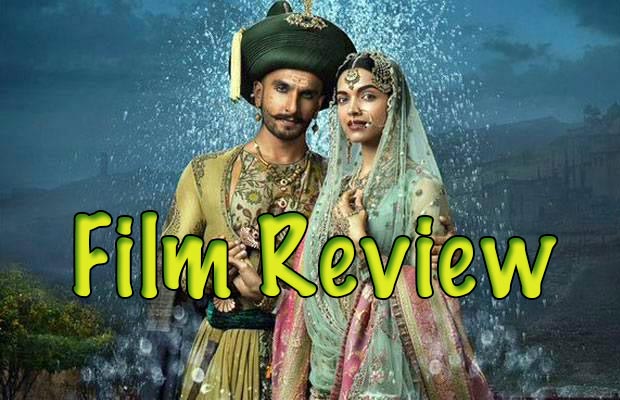 [tps_footer]Sanjay Leela Bhansali has lived with the story of the 18th century Maratha warrior king and his ill-fated romance with Mastani for over a decade. That passion is painted onto every frame of his latest tragic love story. Bhansali’s muse is as much Deepika Padukone as the valiant, devoted, unwavering Mastani – with echoes of the tragedy of Mughal E Azam, as it is Ranveer Singh as the upright king who marches to his own drumbeat. Bhansali doesn’t cut corners here – every tent is overdressed, every warrior over armed, every woman dripping in silks, pearls and gold. And the women – like the widowed mother (Tanvi Azmi) who remains tonsured and swathed in white, is caked with layers of make up. Reality is not Bhansali’s bedfellow. Drama, on the other, snuggles up with him and how.

Ranveer Singh is electric as Bajirao Peshwa, whether he is charging through a battlefield or addressing the royal court, whether he is succumbing to Mastani’s desperate love or accepting defeat in his marriage, he has the audience riveted. On the heels of his victory at Bundelkhand, not only does Bajirao return home to Shaniwar Wada victorious in battle but also having won the undying, unabashed love and devotion of Mastani, the illegitimate daughter born to a Muslim father. This offers the writers ample opportunities to make references to tolerance and love having no religion.

Mastani follows Bajirao to Pune, accepts the humiliation of being relegated to a house of ill-repute, until her persistence melts his heart to such an extent that he forgets all about his devoted and duty-bound wife Kashibai (Priyanka Chopra). The early scenes with Chopra are underwhelming but as her character begins to first crumble and then take charge of her circumstances, she succeeds in showing Kashibai’s vulnerability, class and spine.

Bhansali’s metaphors are sometimes too literal such as extinguishing lamps spelling the end of a relationship but for the most part the story and screenplay (Bhansali and Prakash Kapadia), are interesting, building in court politics, Machiavellian moves and even some war strategizing. The costumes, production design, action scenes and cinematography and top notch and I liked the touch of casting Maharashtrian actors in key parts – Milind Soman and Mahesh Manjrekar among others.

‘Bajirao Mastani’ is indeed epic, opulent and delivers on spectacle (particularly in the song pasteurizations) but it also takes the easy way out painting Mastani as ethereal, true and steadfast. Much like Mastani’s largely monochromatic costuming, her character is also painted in limited colours, although Padukone elegantly makes the character her own. Bhansali leans, once again, on the idea of ill-fated love and underlines it with a utopian idea that love will conquer all. But the over-use of make up, excessively embellished costumes and a slightly runaway script deny the film of a shot of reality which would have helped deepen the connection with Bajirao, Mastani, Kashibai and the seventeenth century world they lived in.[/tps_footer]