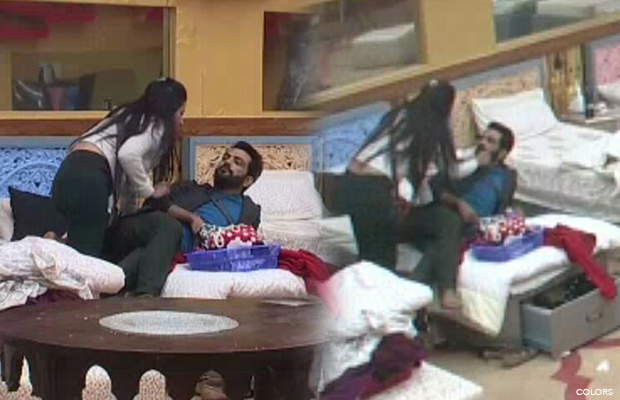 Bigg Boss 10 contestants Manu and Mona Lisa are seen getting closer to each other with each passing day. Manu calls his closeness with Mona as a friendly attitude, on the other hand, Mona calls Manu as her good friend. The two have their personal committed life outside but their intimacy inside the house has grabbed all the eyeballs.

In the upcoming episode of Bigg Boss, you will see Manu and Mona taking their closeness to another level. Mona bends down herself on Manu while he is sleeping on the bed.  While the two are engrossed in their lovey-dovey moment, Manveer silently watches them. What’s cooking, guys?

In fact, recently in an interview, Manu’s fiancé Priya Saini called Mona “despo” and also said that Mona is surviving in the house only because of Manu and Manveer. She also added saying thatManu is such friendly with his female friends off-screen also, itsMonalisa who is trying to get close to her fiancé Manu by hugging and kissing him.