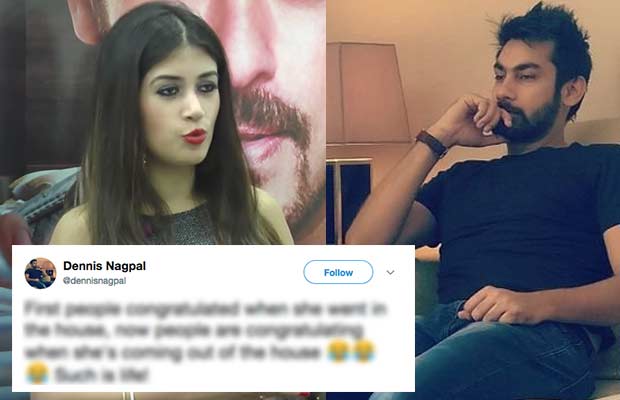 Bandgi Kalra is the latest contestant to get evicted from Bigg Boss 11 house. It was indeed a shock for Puneesh Sharma as the lovebirds have separated. From viewers to Salman Khan and ex-boyfriend Dennis Nagpal, each one had a different take on Bandgi and Puneesh Sharma’s intimacy.

As soon as Bandgi got evicted from the show, Dennis tweeted a sarcastic message for her. He tweeted, “First people congratulated when she went in the house, now people are congratulating when she’s coming out of the house ?????? Such is life!” (sic)

First people congratulated when she went in the house, now people are congratulating when she’s coming out of the house ??? Such is life!#BB11 #BiggBoss11

While she was inside the house, Dennis had announced breaking up with Bandgi on social media. Read Here To Know More: Bigg Boss 11: Dennis Nagpal Makes Some SHOCKING Revelations About His Girlfriend Bandgi Kalra!

After her eviction, Bandgi while talking to HT revealed that she is missing Puneesh since she has come out of the house. Bandgi got voted out of the reality show Bigg Boss 11 on Sunday. Post eviction, she said, ”weren’t faking our relationship for the show. It’s not possible with a format like Bigg Boss, where you don’t know what’s in store for you next. You can pretend for the first few days, but definitely can’t continue.”

When asked about Dennis Nagpal announcing breakup with her, Bandgi said she had broken up with him before entering Bigg Boss 11 house. She also added that Dennis is doing for the sake of publicity.

Well, Bandgi Kalra’s eviction is a game changer. It would be interesting to know how Puneesh Sharma will play the game from now. What do you have to say about Bandgi’s eviction? Do share your views in the comments section below.