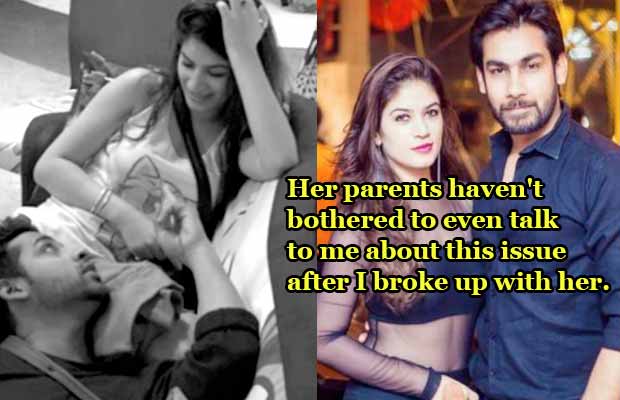 Bigg Boss 11 is taking an unexpected twist and turns with each passing day. The things happening inside the house are not only affecting the inmates but also to the people outside who relate to them.

Just in a few days of the show, Bandgi Kalra and Puneesh Sharma started their romance on the show for the cameras but looks like, their growing closeness is starting to turn real. As we saw in the last episodes, Puneesh discusses Bandgi’s boyfriend Dennis Nagpal. Puneesh was heard saying that he has fallen in love with Bandagi. However, Bandagi said she is scared as her boyfriend would be very angry. Puneesh then tells her that he will handle the situation outside if anything such happens. The two are inseparable since day one and this forced Bandgi’s boyfriend Dennis Nagpal to take a huge step.

Recently, Dennis took to Instagram and blasted out Bandagi. He shared an Instagram story in which he said she “never” deserved him. He also added that he had deleted all pictures of Bandgi from his profile.

Bandgi Kalra’s boyfriend and reality show producer, Dennis Nagpal, who is quite heartbroken, speaks his mind out in an interview with Times Of India. Here are big revelations made by Dennis Nagal on Puneesh Sharma and Bandgi Kalra’s closeness:

On Puneesh and Bandgi’s closeness: Dennis spoke his heart out for the first time. He said, “I was shocked by Bandagi’s act when I realized what she was doing,” he said. “Initially, I had an idea of how the two probably were faking their relationship to stay in the game but after following the show intensively and seeing their talks, I am sure they aren’t faking anymore. Vikas Gupta, too, had tried putting sense into Bandgi’s mind. He was conscious of her image, I could see that but she just didn’t want to listen. It clearly shows that she has fallen for Puneesh.”

Dennis, on probing further said, “I know what is the reality. I could see Puneesh manipulating Bandagi initially. If you are faking a relationship for the game, then you definitely won’t do things after they go off to bed. But these two were seen talking and exchanging love notes after everybody went off to sleep. What do you want me to do about it now?!” “If I am seeing a girl whom I know is in a relationship outside, I won’t fall for her in a week.”

On plans to marry Bandgi: “My family likes her. We were planning to get married soon. We were dating for 8 months and very serious about each other. We had informed our respective families about our relationship and they too were also happy. My dad had met her and was in awe of her because she is well-learned, smart and mature. Initially, my family was hesitant to let Bandagi participate in BB but I stood by her,” said Dennis.

“She started developing a soft corner for Puneesh and he, too, was seen pampering her. She should have thought once about us. Befriending is fine but getting touchy is not done.”

On chances of reconciliation: “I wanted to sort out things with her. But after their conversation, in one of the recent episodes, where she was talking about how she wants to save herself from me to be with Puneesh, with him supporting her and talking ill about me, I just don’t want her back. I am done with this relationship.”
“Whenever I used to travel to Mumbai from Delhi for work, we stayed together under one roof. We were that serious about each other. But now even if she comes out and asks for another chance, I will not give her any. I have had enough. I don’t want any explanation. I don’t want to even get in the house and ask her what the matter is. I am just done and now trying to move on. I am sure this love angle is not a game plan at all.”

Bandgi’s family reaction: “Her parents haven’t bothered to even talk to me about this issue after I broke up with her. In fact, I read it somewhere that they have denied our relationship. I was shocked. They have called my relationship with Bandagi as a rumour. But I was in touch with her younger brother who is in his teens right now.”

Dennis concluded saying: “We were in love and never had any insecurity issues. I just don’t know how she could do this.” “She has always been ambitious about her career but I don’t think she is doing it just to look in love and play her game in BB. I somewhere feel that when one of the two gets evicted, that’s when she will get a reality check.”