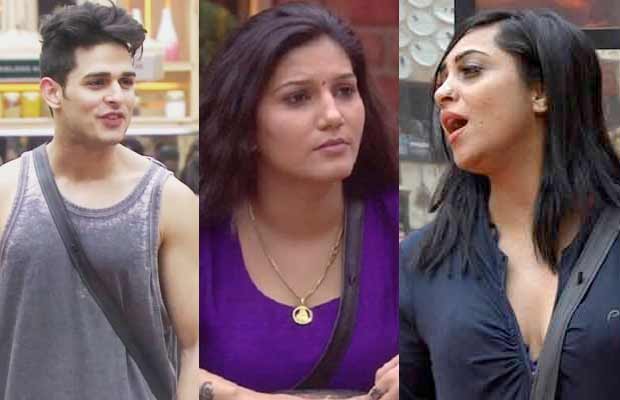 Bigg Boss 11 contestant Priyank Sharma, who has made a re-entry on the show, has fallen into trouble once again. The Splitsvilla 10 fame returned to the house only in Friday’s episode after being thrown out of the house for getting physically violent with Akash Dadlani. But the troubles for Priyank do not end here. He has fallen into trouble for bringing Arshi Khan’s legal case on the show in the recent episode.

However, apart from Priyank, those who will have to bear the brunt of it includes Sapna Choudhary, the channel Colors and production house Endemol. Yes, according to media reports, the counsel of Arshi Khan has filed FIR against the makers of the show, Priyank Sharma, and Sapna Choudhry.

To uninitiated, Priyank tells Sapna to use the words ‘Pune and Goa’ against Arshi Khan, something that he hinted about her police cases. Sapna does the same, which creates a huge fight between them. Arshi then confronts Priyank about it and that if he has revealed things to Sapna, to which he pretends to not know anything of it.

Arshi was quite in a shock and broke down into tears thinking about her Pune and Goa scandal. Arshi was even heard saying that her parents will never accept her after watching the episode.

A statement issued by Arshi’s publicist, Flynn Remedios, reads, “Filing FIR/criminal complaint against Bigg Boss 11 contestants, Priyank Sharma, Sapna Choudhary, Colors, Endemol, today under various IPC provisions concerning the dignity of a woman in legally privileged and protected cases. Colors and Endemol are accused/guilty of permitting telecast of legally privileged/protected and subjudice court matters including the right to prevent or avoid self-incrimination by accused or victim woman and using it for TRP and financial gain.”

Watch Video: Bigg Boss 11 Priyank Sharma’s Entry To Cause A Huge Drama In The House!