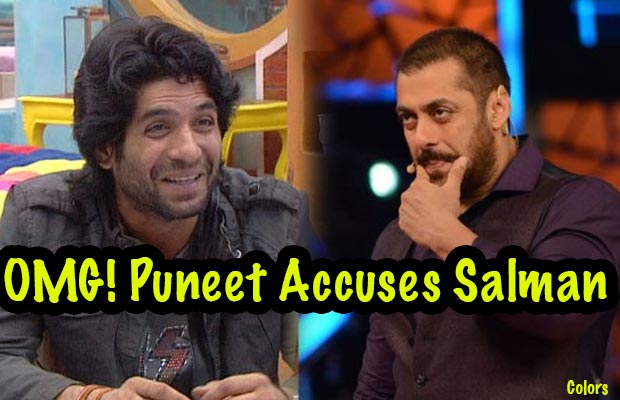 [tps_footer]Since Bigg Boss 9 has started, the housemates of the house have been indirectly claiming host Salman Khan for being partial towards some of the contestants on the show. The recent wild card contestant Puneet Vashist who was evicted from the house last week, has openly claimed that Salman is biased towards Iranian model Mandana Karimi and that he is sure that Salman will make her win the show.

It comes as a shock for everyone when Puneet Vashist in an interview said that Bigg Boss is a s**t show and that Salman Khan doesn’t personally like him or maybe even the channel and so he was out of the house in a week.

The actor said, “This year I am so sure Salman is going to make Mandana Karimi win. Although I am no one to judge, but according to my reading, she is the biggest two faced woman I have ever seen in my life! She was good friends with me initially, but gradually changed sides as per her wish. But Bigg Boss will never focus on that. They’ll only show her side where she is complaining about Kishwer, acting cute or showing her dresses to people around. Nobody is seeing the inner side and everybody is seeing just the outer manipulative side! Ethics wise, this is a total s**t show,” he added.

No only that he also said that he was out of the show because of the channel and Salman Khan as they didn’t like him and that it was evident for him. “I dunno why Salman doesn’t like me but it was evident! Maybe he couldn’t see my talent selling on the show. I was shocked when I found out that the whole segment where Aman and I performed a talent house task was deleted from the weekend episode. Why would Salman want to sell someone else’s talent on his show? Even my votes weren’t less! I figured out that I got huge support from my people who had actually voted for me.

“But Salman personally didn’t like me. Or maybe even the channel thought I am not being how they wanted me to be inside the house. They introduced me to create fights, controversies. But after a while, I was like why should I act so fake? I am not such a kind of person and can’t live in lies! So yea, everything came against me but I am glad I am out. Realised a lot of things in that few days stay on Bigg Boss 9, ″ he said.

Its been seasons and there have been no one who claimed Salman Khan for being partial or his hand to make someone out of the show, but this Puneet has crossed all the lines and its obvious that Puneet should now drop his dream to work with Salman Khan ever.