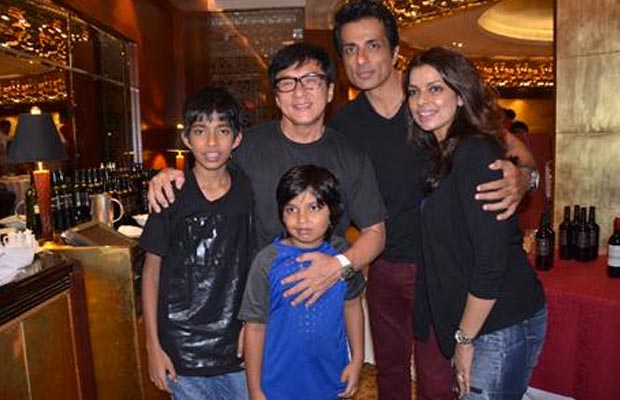 [tps_footer]Hollywood action master Jackie Chan is currently shooting for his upcoming movie ‘Kung Fu Yoga’, which also stars Bollywood actor Sonu Sood. Both the actors were recently in Dubai for the film’s shoot and that is when Chan got a special visit from some of his eager Indian fans. And they were none other than Sonu Sood’s family! The actor’s wife Sonali along with her two boys Eshaan and Ayaan were having a gala time in Dubai amidst Jackie Chan.

From what we hear, it seemed like Ayaan Sood would often roam around in the film’s set and end up meeting Jackie Chan. Soon after which the superstar decided to surprise the kid by showing off some of his iconic martial arts moves. Getting a live action performance from the great Kung Fu master himself was surely an amazing feeling for the kid who is now taking up martial arts classes himself in India. Ayaan is all set to impress Jackie during their next meet and for the same daddy Sood has helped him join a martial arts class.

Coming back to ‘Kung Fu Yoga’, as the name suggests the film will be closely tied to cultures of India and China. Thus it was obvious that an Indian actor will have a prime role in the film, and now we know its Sonu Sood. Looking at Sood’s history of action filled roles in almost each of his film, we think he’s a good choice for this role! The hard working actor will surely make India proud by sharing the screen space with Jackie Chan.

Earlier it was also announced that Jackie Chan’s upcoming film ‘Kung Fu Yoga’ will be shot in India under the India-China coproduction agreement. For which India’s Viacom 18 Motion Pictures and China’s Taihe Entertainment Corporation and Shinework Media have come together. The last movie done by Jackie Chan with an Indian actor was ‘The Myth’ starring Mallika Sherawat. We cannot wait to see Sonu Sood and Jackie together in ‘Kung Fu Yoga’!