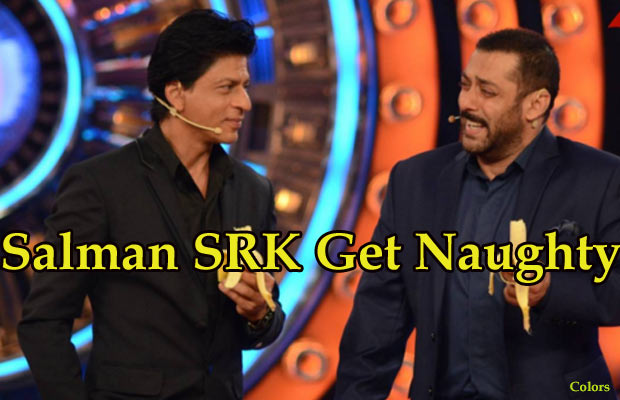 [tps_footer]Salman Khan and Shah Rukh Khan share a good bonding and now that both the actors are seen on Bigg Boss 9 show, the anticipation level to know more on the same is bringing everyone on the edge of the chair. We exclusively revealed how Salman Khan greeted Shah Rukh Khan on the show as he arrived for the promotion of his film Dilwale post its release.

Both the actors danced on each other’s super hit songs and had a gala time playing interesting tasks. To begin with fun, they also shared double meaning jokes on the stage. Both the talented actors created laughter riot on Bigg Boss 9 show.

SRK removed banana from his pocket and offered to Salman. Salman also removed from the pocket saying, “mere pass mera hai”. They were also heard saying that people were waiting to see them together as if its their ‘suhagraat’ night. They went ahead talking saying, how we people will make a unique night, to which SRK said, “ pehle to hum iss kele ko iske chilke se alag karenge. After this iss raat ko yaad gaar BANANA hai.”

During their double meaning jokes, Salman Khan and Shah Rukh Khan asked a pregnant lady from the audiences, if she is expecting. To which she replied yes and the actors asked how? The lady replied them saying, “jaise karte hai waise”

Both the actors were insanely funny yet entertaining for the audiences. Shah Rukh Khan had a best time ever at Bigg Boss 9 show with Salman Khan. The history was repeating on the television yet again.

ALL LATEST BIGG BOSS 9 WITH SALMAN KHAN STORIES CLICK HER