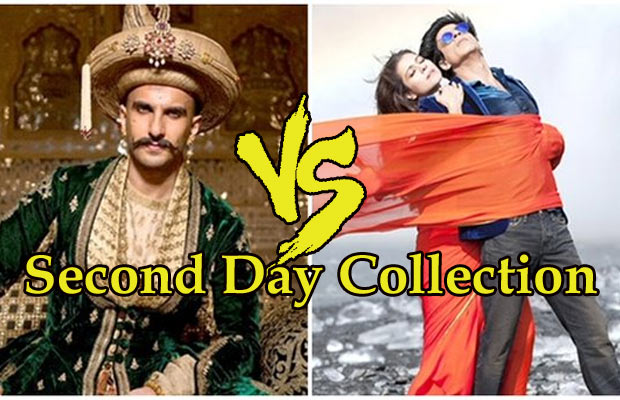 [tps_footer]Bollywood films ‘Bajirao Mastani’ starring Ranveer Singh, Deepika Padukone and Priyanka Chopra and Dilwale starring Shah Rukh Khan, Kajol, Varun Dhawan and Kajol have finished its second day run at the box office. The film is undoubtedly facing lot of competition from ‘Dilwale’, but nonetheless it has managed to collect decent amount for itself, which could have been better had there been no clashes. ‘Bajirao Mastani’ has collected Rs. 12.20 crores net approx (Rs. 122 million) on its first day at the box office and the number is far less than ‘Dilwale’. However given the cast of the film and a director like Sanjay Leela Bhansali, it is not at all a bad figure.

Bajirao Mastani showed gains of around 22% on day two, which is decent. On day two, the film collected Rs. 15 crore net approx. (Rs 150 million). The business of the film over the first two days is Rs 27.20 crores net approx. (Rs 272 million)

The film is good in Maharashtra where the film has caught up with Dilwale and even surpassed in some cities, but the rest of the country is still lagging. Bihar, West Bengal, Assam and Orissa are very low.

As predicted earlier ‘Bajirao Mastani’ performed very poorly in the Northern regions like Delhi and UP as well as South areas where this genre of movie is usually not preferred. Especially with no big name to back it up, these areas preferred to watch Shah Rukh Khan starrer movie which leaves only Maharashtra backing up ‘Bajirao Mastani‘. There were dubbed versions of the film released in Tamil and Telugu but much like every Hindi dubbed film down in South, this experiment was also a disaster.

‘Bajirao Mastani’ had a far less opening rate than ‘Dilwale’ with only 30% occupancy on its initial opening day. The film also has relatively less number of screens than its competition, but had managed to get some of the best screens in Delhi/UP region. Despite doing so the crowd went for ‘Dilwale’ as collections have been great for the film in that region. If released solo, ‘Bajirao Mastani’ could have had a much better business. Now that the figures have been disrupted due to the clash, the film needs to cope up in the coming days.

‘Bajirao Mastani’ is based on the life of Maratha warrior Peshwa Bajirao (Ranveer) and his two wives Kashibai (Priyanka) and Mastani (Deepika). The film has however been getting good reviews as well as word of mouth. It also faced backlash and protests in regions of Maharashtra due to which collections were affected as shows got cancelled. We wait to catch the first weekend collection of the film now.[/tps_footer]