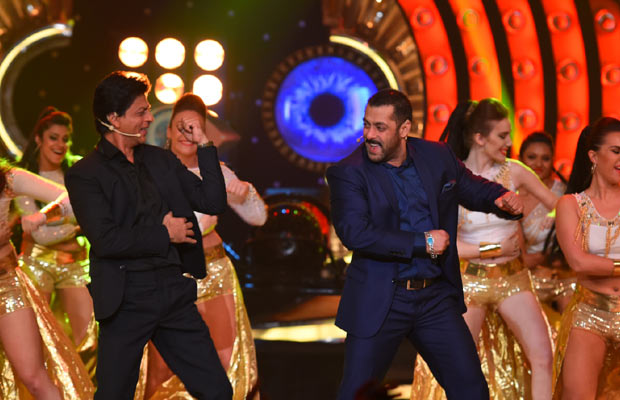 [tps_footer]Finally the most awaited moment has arrived and we see Salman Khan and Shah Rukh Khan sharing the same stage on Bigg Boss 9 show. Shah Rukh Khan made a grand entry and was welcomed by none other than Salman Khan. The day has arrived when finally Salman and SRK are on the show.

The entire nation has waited with bated breath to witness the union of the two most distinguished Khans since the time they fell-out. The highly anticipated episode will which will be aired tonight, will have Salman and Shah Rukh make history with their quirky sense of humour and dole out entertainment like never before.

They hugged each other on ‘ye bandhan pyaar ka bandhan hai’ from their most iconic film Karan Arjun. They danced on songs from their movie, Salman shook a leg on ‘lungi dance’ from SRK’s film ‘Chennai Express’ and Shah Rukh swayed to ‘baara mahine’ from Salman’s film ‘Ready’. The most iconic moment was created in the history of television.

The duo was entertaining at their best like never before. The actors had a gala time with Dilwale actress Kajol. SRK and Kajol performed on the most hit song ‘gerua’ from their film Dilwale. All the three recreated ‘Kuch Kuch Hota Hai’ moment again after decade.[/tps_footer]