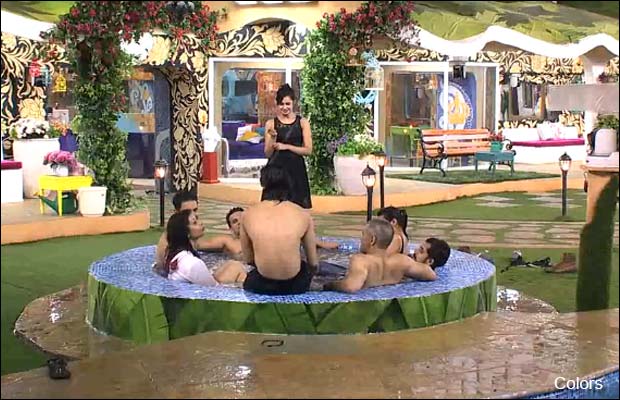 [tps_footer]Bigg Boss 9 house is known for its changing equations among the contestants and we will see new friendships coming up. Yesterday where the contestants were against the new wild card entrant Rishabh Sinha for his devil avatar during Hotel BB9 task, now the tables have turned.

After the end of the task, the contestants were seen having fun time inside the pool with Rishabh Sinha. Interestingly, it felt like there was a start of new friendship tale. With a little fire in the house comes a little love and that’s what you will see between Rishabh and Yuvika. While everybody was inside the pool, Yuvika was standing outside and that’s when Rishabh came out of the pool and started signing SRK‘s famous ‘bhooli si surat’ song for Yuvika while Yuvika was seen blushing and smiling on it. Is it a start of new love story in the house?

Also Kishwer said that how Rishabh wanted to go on date with Yuvika in BB9 house when Prince took her on date. Rishabh also said that he wanted to be personal butler for Yuvika and Yuvika nods saying, “haaa”. Soon after Yuvika’s reaction on it, Rishabh falls on the floor, pretending that she killed her with dialogue. Also Yuvika says Rishabh, “aap bohat acche ho’ and pushed him inside the pool while others were teasing them.

Is it just to get the attention as Salman Khan had grilled them during weekend for not doing anything in the show or is it a start of new love story in the house? Tie will tell better!

Also Watch: Bigg Boss 9: Suyyash Rai Cheats On Kishwer Merchant, Romance With Someone Inside The Pool!