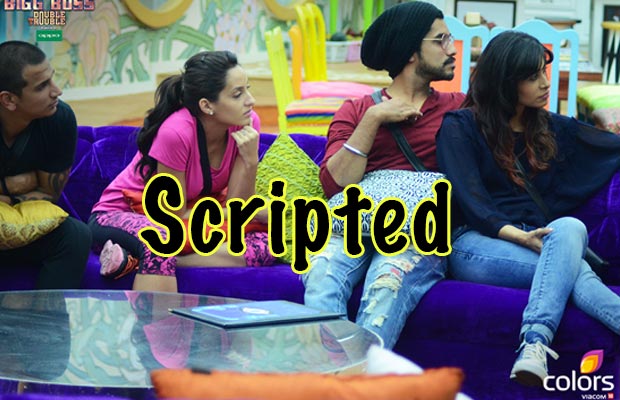 [tps_footer]As we all know, Bigg Boss is one of the popular and controversial television reality show. With every new season, the show has entered in its 9 season and is trying to grab all the eyeballs. But due to few major reasons, the TRP of the show didn’t work out well for the show this year.

Focusing more on the TRP of the show, the makers of Bigg Boss 9 are trying their best to make the show more interesting with more controversies and gossips. Since the start of the season, more than 5 wild card contestants have entered the house, but it seems the show failed with this strategy too.

Apart from TRP, this season is more like scripted, which also seems to be much obvious for everyone. Our sources have revealed, the evictions of the contestants are pre planned, which is also evident for us now. We reveal the reasons on how the show is scripted.

Two weeks before, we saw Digangana Suryavanshi made an exit from the show on the basis of housemates voting. The voting lines for the audiences were closed and it was obvious that the housemates would vote out Digangana for the eviction opposite Suyyash Rai, as he had more friends in the Bigg Boss 9 house in comparison to Digangana.

Even when television actress Digangana made an exit from the house, she revealed that her eviction was pre planned by the show and that if it was based on the audiences voting, she would have been in the finale. The other reason for her eviction was also due to her no participation in the task. As Digangana was suffering from typhoid, she was not allowed to participate in the tasks and so the makers of the show planned for her eviction, maybe as she was not creating enough spark.

Not just once, even Rimi Sen’s eviction was already planned because of her ‘I Don’t Care Attitude’. As Rimi was doing nothing in the house, she got evicted despite of being so popular among the audiences. Even during one of the episodes, Salman Khan revealed that Rimi is popular outside and has been getting highest votes amongst all.

Our sources revealed, when wild card contestants make their entry in the house, the makers of ‘Bigg Boss 9′ show train them on how to spice up the show and that they have to be part of more controversies. Just before Rishabh Sinha made his entry in the house, he was asked to behave like a devil and trouble the housemates in order to give a spark to the show.

Well, this does not come as a surprise for us if ‘Bigg Boss 9′ contestant’s reactions are real or scripted and that if the housemates of the house are doing what the makers of the show demand. But with our sources information, do you think the show is scripted, if not completely, but partially?

What’s your take on the same? Put your views in the comments section below!