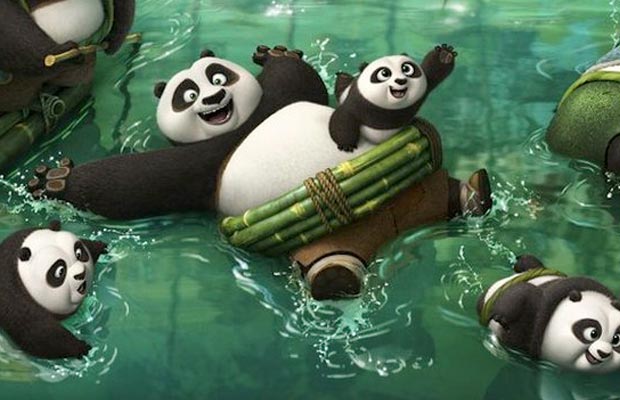 [tps_footer]The third official trailer for the much awaited animated film ‘Kung Fu Panda 3′ is out, and it will tickle your funny bones till you laugh out loud! The makers of the film have very cleverly included all of the funniest portions from the film in trailer to keep us glued till the very end with a huge smile on our face. The latest addition to the film, that is the whole new panda clan are killing it with their comic timing and hilarious expressions. As we revealed earlier, the third part of the film will see our main hero Po reuniting with his long lost panda family, and the third trailer will show you what the panda clan is like!

In the beginning of the trailer Master Shifu can be seen advising Po about finding out who he really is on order to achieve unimaginable powers. Po then accidentally meets his real father and goes on to meet the rest of the panda family where there are old pandas, little adorable chubby kid pandas as well as young and beautiful pandas. Then enters the antagonist of the movie, Kai –The Collector who has the ability to collect the powers of whichever Kung Fu Master he defeats. Po being the dragon warrior becomes his ultimate target and we will see a hilarious yet intense face off between the two.

‘Kung Fu Panda 3’ will also see Mei Mei, an over enthusiastic female panda who has been promised an arrange marriage with Po. We can’t wait to see how that turns out! The funniest part about the third trailer is the training sessions between Po and his panda clan. All the chubby pandas gear up to fight Kai and we cannot stop adoring their cuteness amidst the fits of laughter.

The storyline, plus the wonderful cast and the great new character additions are just some of the reasons why ‘Kung Fu Panda 3′ is highly awaited. We love the chemistry between Po and his new enemy Kai as well! The film has a star studded cast of Jack Black, Angelina Jolie, Dustin Hoffman, Jackie Chan, Seth Rogen, Rebel Wilson and J.K. Simmons voicing the amazing characters. Distributed by 20th Century Fox, ‘Kung Fu Panda 3′ is all set to hit theaters in USA on January 29, 2016. Watch the 3rd trailer here: