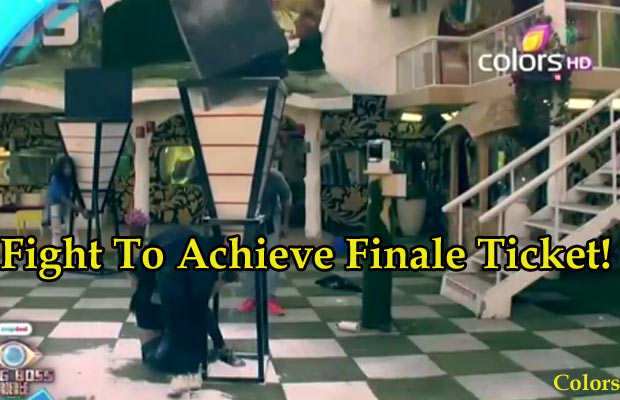 With every new day, Bigg Boss 9 contestants are inching closer to the grand finale. With Seven housemates left in the house, as we know Bigg Boss introduced ‘ticket to finale’ task, each and every contestant was trying its best to save their sand containers, placed in the garden area of the house in an inverted pyramid position.

All the housemates were supposed to keep more amount of sand in their container compared to others. Everyone was playing its individual game, but no task is complete without fights and controversies and with this Rishabh Sinha and Mandana Karimi got violent with each other.

It all started when Rishabh was trying to break Mandana Karimi’s sand container tap in order to remove her from the game. While trying to break her container tap, Rishabh Sinha kicked Mandana Karimi, which didn’t go well for her. The task definitely required lots of struggle, but fights and controversies were over everything in this task. All the housemates had planned to target Mandana, but she ultimately wins the race by leading with more sand in her container.

While viewers must be eagerly waiting to watch who makes it directly to the finale, which is just a few weeks away, we reveal the winners of the task. After trying their best to hold and save their portion of sand in the inverted pyramid containers, three contestants- Prince, Kishwer and Mandana have already won the task. All the three would jump on the next task soon to reach directly to grand finale.