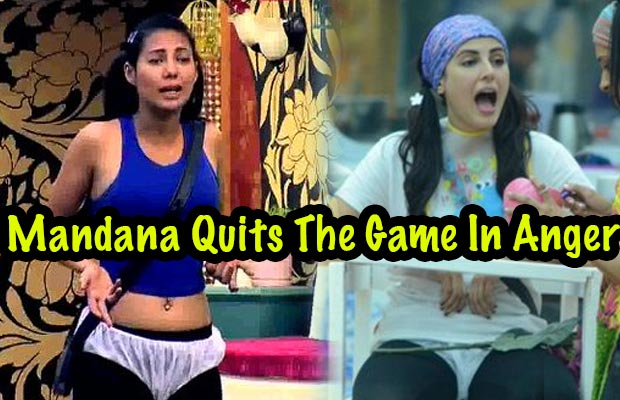 Day 37 in the Bigg Boss 9 daycare was all about screams, cries, tantrums and diaper changes. Waking up to Tay Tay Phiss in the morning, the housemates realize that there is now a role reversal in order. Suyyash, Aman and Digangana are caught discussing whether or not Mandana will participate today. Suyyash is of the opinion that since Mandana has to be on the other side and irritate the caretakers, she will definitely participate. Turns out he is right since Mandana confirms the same.

After a day full of sickness, Mandana is all hail and hearty and actively participating in the task. Kishwer takes note of this and passes comments on Mandana’s health causing Prince to react sporadically. From Aman and Suyyash hitting each other with pillows to Digangana throwing a tantrum wanting her hair band back, the kids went all berserk to irritate the opposition team. Suyyash claims that Prince got too physical with him and this sparks an intense squabble between the two buddies, creating a rift in their bromance.

More confusion ensues when Aman claims that they tore his diaper in order to get it changed and the housemates get involved in a tiff about the rules of the task. When Digangana takes the carpet out of the house, Rishabh stops her from going out, aggravating Suyyash once again. Suyyash says that Digangana is a child and can do anything she wants to. Prince claims that it is against Bigg Boss’ orders to go out of the house. Prince and Suyyash get into an argument once again and when Rishabh intervenes, Suyyash asks him to stay out of it.

Upset Prince taunts Mandana saying that her health seems to be fine today. Mandana gets angry at him and claims that Prince held her hand too hard and hurt her. Further, we will see the housemates arguing over the limits of being physical. The housemates recognize that they cannot play the game without a supervisor but Rimi insists that she cannot make a decision amidst such extreme controversy.

The housemates finally come to a consensus on the rules and when you just begin to believe that peace has been restored and the task is about to commence well again, Suyyash and Prince get into a tiff once again. While Prince is trying to get Suyyash out of the bedroom, Aman holds on to the bedroom door tightly. This annoys Prince and he claims unfairness. When Rishabh tries to intervene, Suyyash tells him off for a second time, spiraling into a war of swear words.

When Rochelle tries to pull Mandana’s diaper down, Mandana claims that Rochelle got physical with her and quits the game out of anger. Irritated with the whole ordeal, Mandana also swears at Prince. Later in the night while having a conversation with Suyyash, Prince says that he is tired of the antics of the housemates and wants to quit. The housemates wonder when they will be able to complete a task successfully. As the day comes to an end, Prince reminisces about his naughty school days.