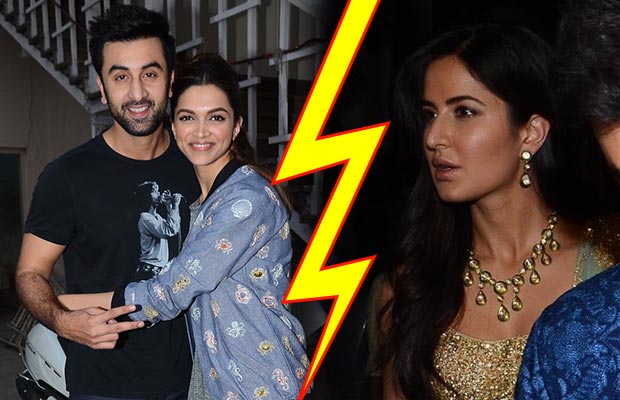 Bollywood’s ex-couple Ranbir Kapoor and Deepika Padukone broke up long back, but their chemistry and relationship have also been the talk of the town. Ranbir Kapoor, who is currently dating actress Katrina Kaif, is nowadays busy with the promotions of his film ‘Tamasha’ with Deepika Padukone.

Both ex-flames Ranbir and Deepika are together for their next upcoming film ‘Tamasha’ after ‘Yeh Jawaani Hai Deewani‘ and moreover anything, their chemistry and the unique bonding during the promotions is grabbing all the eyeballs. During an interview recently, Deepika also confessed that she still loves Ranbir because she doesn’t think that every feeling has to be broken down and she don’t believe that emotions are undimensional anyway.

Recently, beautiful actress Deepika Padukone was asked whether she still loves Ranbir Kapoor. The head strong actress confessed, “Of course I do. I don’t think that every feeling has to be broken down as I don’t believe that emotions are unidimensional anyway. Feelings and emotions are very layered. He is someone I have always loved and someone I will always be extremely possessive about and very protective about. When I read about him, when I see his work, good bad whatever it is, I have my own monologue that is going on in my head and which I do share with him. I might even pick up the phone and talk to him immediately.”

Also Ranbir Kapoor was seen being frank about Deepika. Ranbir, who rarely brings out about his personal life publicly, was seen talking about Deepika at his best. When asked what he does not like about Deepika Padukone, Ranbir said, “That she is a flirt. That she is working too much and should not burn herself out. She should take more holidays and breaks and should reserve herself, which she has started doing now.”

Not stopping there, Ranbir Kapoor had a big list of likes about Deepika and continuing on the same, he said, “(I like) Her values that come from her parents. She can many a times say the wrong thing, do the wrong thing, be obnoxious, can be rude, can be sweet but, it’s all coming from a place of organic sense of things, I don’t think she is ever saying something because somebody else has said it. It’s coming from what she thinks and she is very positive.

On the other hand, Ranbir Kapoor’s girlfriend Katrina Kaif who is busy with the shooting of her next film ‘Baar Baar Dekho’ was asked whether she would like to change anything about her beau Ranbir. To which she replied saying that she wants to change his phone manners and the way he expresses things.

Talking about her marriage plans, the gorgeous actress said that its true that she is in relationship with Ranbir, but she doesn’t want to commit for something that is not sure. She also stated that if Ranbir wants to get married, that means he wants to take their relationship to another level, but one will never know about the uncertainties. So if they plan to get hitched, they will declare it, she added.

No matter what, the past keeps haunting and with Katrina Kaif’s latest statement, it seems that the duo are unsure about their marriage. Do ‘uncertainties’ and ‘unsure’ hint that they are not planning to take their relationship further than this? We wait to see how long the magic of love between the two would continue!

Meanwhile on the work front, Ranbir is promoting Tamasha with ex-beau Deepika while Katrina Kaif is shooting for ‘Baar Baar Dekho’ with Sidharth Malhotra.