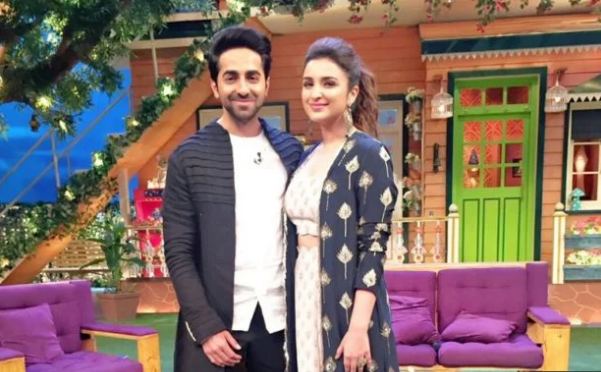 There is no laughter on the sets of The Kapil Sharma Show ever since Sunil Grover and other cast members have boycotted.

As we all know Kapil Sharma is currently in a mess since Sunil Grover and other comedians have boycotted his show, “The Kapil Sharma Show”. The channel, as well as Kapil, is badly trying to sort out things but nothing is working in the favour. Sunil Grover has made his stand that he will not return to the show. Amid all the controversy, Kapil Sharma continues with the shoot for the upcoming episodes.

Last night, Kapil Sharma shot with celebrity guests Parineeti Chopra and Ayushmann Khurrana, The two talented stars were seen on the show for the promotions of their upcoming film, Meri Pyaari Bindu. Well, Kapil is having a hard time as the main cast of the show is missing.

Do you think actors Parineeti Chopra and Ayushmann Khurrana could have managed to cheer up Kapil Sharma in this tough phase? Well, as we reported earlier, Kapil is quite upset with the whole incident. Kapil Sharma, who shot few gags for the upcoming episode, seemed forced with the comedy timing. After some time, he called off the shoot and walked away until the guests of the show arrived.

Will we see the same fadedness in the upcoming episode of The Kapil Sharma Show? Will Pari and Ayushmann’s entry manage to create magic and bring laughter back on the sets? Time will tell!

Meanwhile, Sunil Grover will be seen on Indian Idol finale as Dr. Mashoor Gulati. Yes, you read that right. As Sunil Grover has a contract with the channel, he readily agreed to be on the Indian Idol but made it clear that he won’t reports on the sets of The Kapil Sharma Show.