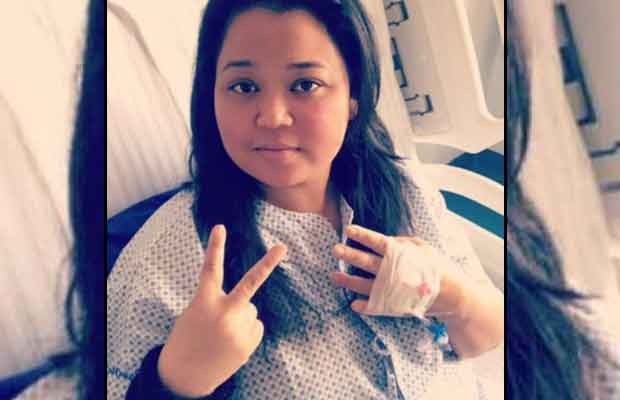 Bharti Singh will miss the grand finale of Nach Baliye 8 because of her operation!

The famous comedienne Bharti Singh was admitted to the Kokilaben Dhirubhai Ambani Hospital this Thursday after she experienced an excruciating pain in her stomach. Later on, she was diagnosed with gall bladder stones and is currently on medication.

Bharti is keeping well now but she needs to be operated. When her friends and fans got to know about this, they started wishing for her wellness. Thanking all those people, the comedienne took to the picture sharing site Instagram.

Sharing a picture of herself from the hospital, she writes, ”Thank you everyone for your wishes. I’m feeling a lot better now.#love#wishes #respect.”

She was a part of the eighth season of the dance show Nach Baliye, with her fiance Haarsh Limbachiyaa. Although eliminated from the show, they were going to give a performance in the finale episode. But unfortunately this won’t be possible now due to Bharti’s surgery.

A source has been quoted by Indian Express saying, ”Bharti and Haarsh had various segments in the finale episode. However, Bharti had to leave because of severe stomach ache and was rushed to the hospital around 3 am on Thursday. Now, she will have to undergo a surgery and thus the couple will not be seen performing in the finale episode on Sunday.”

Bharti and Haarsh are going to get married soon. Talking about the same, the comedienne had said earlier, ”By November-December we will get married. We haven’t decided a date yet because there are a lot of shows we are working on. When I want to get married, I wouldn’t like to do anything for one month before that. I want to just get busy with pre-wedding preparations. Shootings will keep happening but marriage happens only once.”