The grand finale of the super controversial reality show Bigg Boss 10 is just inches away. Every episode is taking some drastic twists and turns in order to surprise its audiences. We are witnessing the final week with 4 finalists of Bigg Boss 10 show viz. Indiawale – Manu Punjabi and Manveer Gurjar and Celebrities – Lopamudra Raut and Bani Judge.

We earlier told you that Rohan Mehra got evicted in a mid night eviction post a task. The Mela Task organized by Bigg Boss witnessed various guests in the house like Nitibha Kaul and Mandana Karimi. As soon as Mandana entered the house things started to turn nasty between her and finalist contestant Lopamudra Raut. Since Mandana is a Bani J fan, she started complaining about Lopa about her behaviour. She said that Lopa keeps on nagging about everything like a small child and that Bani never speaks ill about anyone else.

Not only this, she also compared Lopa to Priyanka Jagga and Swami Om and asked her to be more respectful to Bigg Boss. After Mandana went, Lopa burst into tears as her words shattered her completely. Her rival, Bani J and all of the other fellow contestants later came to console her and calm her down.

Not only this Rochelle Rao who is also an Ex Bigg Boss contestant has come out in support of Lopamudra. Rochelle, in a series of tweets wrote about Mandana and slammed her and also said that Mandana should have encouraged all the contestants since they are in the final days of the show. She tweeted, “OMG Mandana was The most disrespectful2 #BiggBoss who is she to talk! So tired if her negativity, nothing new even 1 year later…” 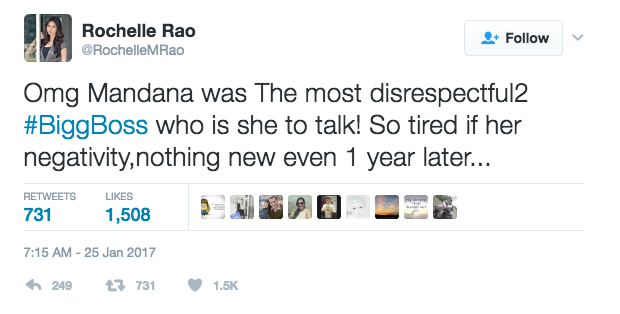 “Why would someone make people feel like this in their last week! This is the time to encourage them!Doesnt she remember how hard last 2wks were?” 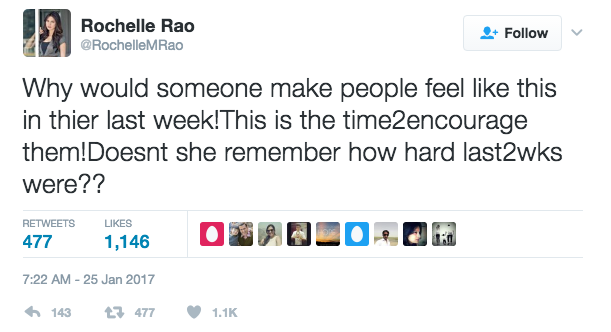 She even came out in full support of Lopa and tweeted,“@lopa9999 dont listen2a thing she says..its the last week, time4positivity not negative feedback but what wud she know thats just Mandana!!’

Do tell us what your views are and don’t forget to watch the grand finale of the show which is slated on 28th January.

Also Watch Video: Bigg Boss 10: Here’s What Lopamudra Raut Did After Being Insulted By Mandana Karimi!