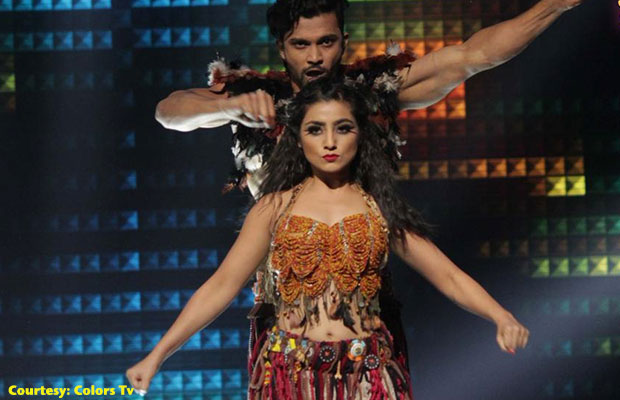 [tps_footer] The most loved TV dance reality show ‘Jhalak Dikhhla Jaa Reloaded’ is soon to reach its grand finale. In the recent episode of the show the audiences will see the twist of ‘Teen ka Tadka’. The most popular celebrities Gautam Gulati, Drashti Dhami and Sanjeeda Sheikh will be entering the show and performing with the contestants.

Last week, wild card entrant Roopal Tyagi left ‘Jhalak Dikhhla Jaa Reloaded’ and this week also one wild card entry is going to be eliminated. Speculations suggest that wild card entry contestant Neha Marda will be eliminated during this week’s show. TV star Neha Marda aka Gehna of Balika Vadhu made a wild card entry last week and it seems her hard luck didn’t work out for the show. During the last episode of the show, she was in the bottom and it doesn’t come as surprise with her elimination now.

Reportedly, Anita Hassanandani will land up in the danger zone even after winning the best performer in the previous week. Also with too many twists and turns the show wont be having ‘Jaan ke liye dance’ The competition level is now tough between all the contestants.

The dance reality show has completed more than four years on small screen and presented the industry with some of the most well trained celebrity dancers who have won the show. In the most recent twist if reports are to be believed the five remaining contestants of this season are about to receive a surprise gift. In a new “Teen ka Tadka” twist three of the hottest, best and most popular celebrities Gautam Gulati, Drashti Dhami and Sanjeeda Sheikh will be entering the show and performing with them.

We just can’t wait long enough to see these three sizzle on the ‘Jhalak Dikhlajaa Reloaded’ stage. We are sure that it is going to be the hottest and most entertaining episode of this season.[/tps_footer]