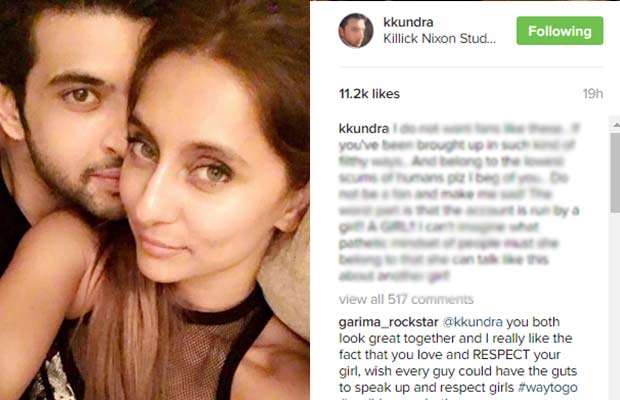 Karan Kundra and Anusha Dandekar are in a steady relationship. The two stars who are doing too well in their careers have never been shy of confessing their love. Karan and Anusha are very open about their relationship. Both the celebs are known for their adorable stints towards each other.

Well, everyone has seen Karan’s cool side but the actor is not so cool when it comes to his lady love Anusha Dandekar. Must say, Karan Kundra is a protective boyfriend by all means. Recently, one of Karan’s fans posted a derogatory comment about Anusha on the photo sharing app Instagram. The handsome hunk surely lost his cool over the same and replied in a lengthy note.

The fan in his comment had called Anusha a prostitute and Karan could definitely not take the insult. The actor replied, “I do not want fans like these.. If you’ve been brought up in such kind of filthy ways.. And belong to the lowest scums of humans plz I beg of you.. Do not be a fan and make me sad! The worst part is that the account is run by a girl!! A GIRL!! I can’t imagine what pathetic mindset of people must she belong to that she can talk like this about another girl!”