There is no doubt about the huge scope for varied content on the Indian Television. The makers are experimenting with all kinds of different stories. With new shows coming up, some seem to be leaving behind the basic logic.

Pehredar Piya ki is one such show which has everything from majestic palaces,vintage cars and royal setting but no sense!

Shot in the scenic locales of Rajasthan, the show’Pehredaar Piya Ki’ is the unique tale of 18-year-old Diya (Tejasswi Prakash), who, under extraordinary circumstances, takes the bold step of getting married to nine-year-old Ratan (Affan Khan) and agrees to be his silent protector. While Diya commits to the relationship, Ratan is enamoured by her and considers her to be a pari from the fairy tales he has heard from his Kaki Maasa (Aditi Deshpandey). Though a mismatched couple, they create a happy world for themselves. While Ratan tries to cheer Diya with his cute gestures, she keeps the promise to protect him and nurture their relationship.

Karan Wahi who is perfect combination of good looks and wit, is known for his bold statements and frank self. Recently, Karan lashed out the makers of the show ‘Pehredaar Pyar Ki’ which is aired on Sony Entertainment Television and we couldn’t agree more!

Recently, Karan vented out his anger on Facebook. This is what he had to say:

”Dear producer and channel .. i understand we cant make shows like how i met ur mother and friends, and honestly i dont expect us to also ,but for the love of god and for the reason we all got in this industry plz dont sell me stupidity in the name of content which gives trp because honestly no one is watching this . Leave aside other people i think the fraternity only dsnt . I wish and pray well fr everyone whose a part of this show also but it wud be great if we started enjoying our work and not just working because we dont have an option… Not to sound arrogant but we can be better than this.” 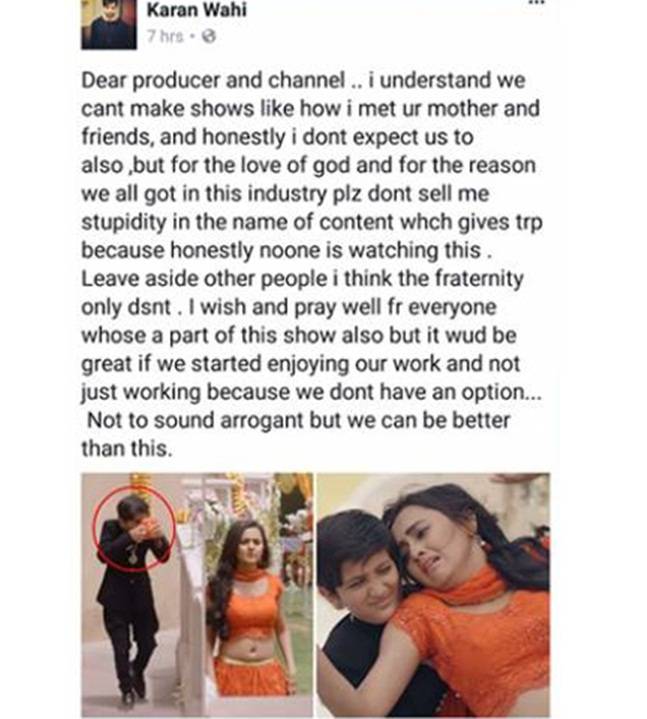 We hope Karan’s rant is paid heed to and we are presented with better shows to keep ourselves entertained!