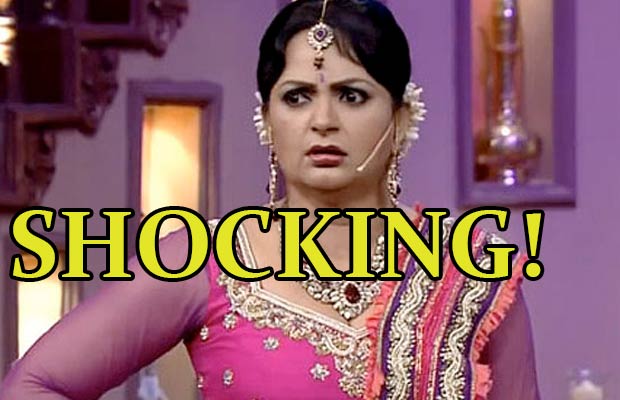 [tps_footer]Upasana Singh who rose to fame on the small screen with Comedy Nights With Kapil by playing the character of bua is facing a huge hassle. Upasana was the only one who left Kapil’s clan and joined Krushna Abhishek’s Comedy Nights Live. The actress is now surely regretting her decision for the same.

Reports state that things are very ugly between Upasana Singh and the makers of Comedy Nights Live. Upasana has already decided to leave the show and has also expressed some unknown reasons. In an interview Singh confessed, “First of all there was no work satisfaction. I haven’t worked in such a pathetic show before. On some occasions, I could not believe it was a comedy show because the script was so bad. Secondly, they did not fulfill a single commitment.”

Upasana who is still applauded for her comic timing also stated about lack of punch lines saying, “I feel they roped me in just because they wanted someone who had worked in Kapil’s show before to help them get a good TRP. Essentially, they have just used me to their advantage. Now that the show has opened to a good TRP and is established, they have started making me feel useless on their show. The lines I got on the show were without any humour and punch lines. I requested the director of CNL several times to look into the matter, but he always said, “Abhi show shuru hua hai..dheere dheere theek ho jaayega.”

Further the talented actress who is also a well-known name in the Bollywood front also stated that her agreement for the show was delayed up to four months saying, “To top it all, they did not give me the agreement even after four months of working with them. Maine jab inhe kaha aap mera agreement do, to roz taalte rahte the.When I finally got the agreement, there were so many terms and conditions that I couldn’t believe. The agreement said I could not do another comedy show. It also said they could kick me out of the show in 24 hours.”

She added, “Surprisingly, it did not have the terms and conditions we had agreed upon. I told them if you could kick me out of the show in 24 hours, I should also be able to quit the show by giving 24 hrs notice. I have made a huge mistake by committing to this show.”

Not stopping at just that Upasana Singh made a shocking revelation saying that she has been paid just for two episodes. The comic actor revealed, “They have paid me for just two episodes. They had in fact promised to pay every 30 days. They did not fulfill that promise. Now they are saying they will clear my dues only after I sign the agreement. Clearly, they want to trap me. But I want to tell them, that they can’t stop my payment. I will drag them to court. You can’t do this to an actor.”