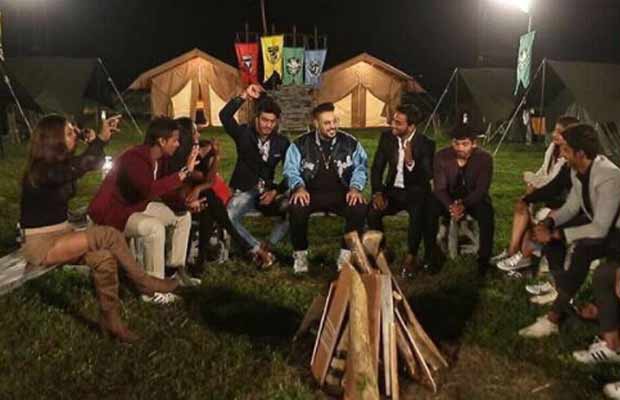 Famous rapper Badshah came this time on Roadies Rising. But, he didn’t go just like that. He had a special power.Read on.

Last night’s episode of Roadies Rising was eventful at the camp of Patiala for all the Roadies. The great rapper Badshah came to the camp and the Roadies had an awesome time interacting with the singer. He had heard that some of the Roadies were dancers. As if she was waiting for it, Samyukta jumped in and started dancing on Badshah’s hit song, Mercy. Priyank, Shiv and Meenal joined her as they are also dancers and choreographers. Although Samyukta overshadowed them, there was proof for her ‘attention-seeking’ attitude as she grooved on the song occupying the whole space.

After some time, the singer departed promising to meet them at the ‘vote-out’.

When the Roadies reached the place for the vote out, Badshah was there and he had got a power to immune(save) one of the Roadies from the following vote out. The singer decided to immune Samyukta and after that, he went. Well, Samyukta’s dance moves do prove useful for her.

On the other hand, Gaelyn(the host) told them that that day there won’t be a vote out but a ‘save-in’. Basically, it means that all the Roadies had to vote for that one Roadie whom they wanna see in the competition and those two Roadies who don’t get a vote would leave the show. After the voting process, three Roadies, Khushnuma, Samar and Veerpal did not earn any vote. Then came the ruler of camp Patiala Mandeep’s time to use his power and eliminate anyone Roadie and so keeping up with the rivalry with Nikhil’s gang, Khushnuma was out of the game. After that, all the Roadies had to openly vote for the contestant, either Samar or Veerpal, who they wished must leave. Samar was saved from being voted out but, Veerpal had to again leave the show.The night ended there but the adventure did not.

Next day, there was another battle to enter the semi-finals.All the gang leaders had to choose one member of their gang who they would give a chance to be in the semi-finals. Hence, Baseer from Prince’s gang, Shane from  Neha’s gang, Samar from Rannvijay ‘s gang and the one and only left contestant from Nikhil’s gang, Priyank.

The task was to be performed with great effort and concentration. In the first stage, the Warriors had to put sand in a box which was placed on a see-saw and make it heavy so that they could get to the other side and climb on a plank stationed a little up from the see-saw. The second stage comprised of a maze. The contestants had to cross the maze with concentration and without putting their legs down on the ground or their hands on the maze. Basically, it was just a game of balancing your body. On the third stage, they had to climb up to another plank with the help of tires hung in between the plank and the contestant. It was the hardest and the most exhaustive part. After that, in the fourth stage, they had slide on a Zipline and break the five pots that were suspended in the air and land on a heap of sand wherein the task would end.

The tasks started and every guy went one by one. Priyank was very good with his act and stood up to the expectations of Nikhil. Next went Baseer who was also very good and nailed it. Shane was a total disaster. Crossing the maze was a task for him and he continuously kept putting his hands on the maze and legs on the ground. During the task of the tire, he was totally exhausted and could not complete his task and gave up. It was bad for Neha that Shane gave up. The last was Samar who went and he was good at the maze but the tires exhausted him. If it wouldn’t have been for the gang leader and his teammates, he would have given up. But, he completed the task and was totally exhausted.He was later taken out in an ambulance.

After giving up, Shane had to leave definitely. Decision time came, the announcement of the second semi-finalist. Priyank had completed the task in 5minutes and 35 seconds. But, Baseer had again shown his power and won the task by completing it in 3 minutes and 59 seconds.  Ultimately, Baseer Ali became the second semi-finalist with Mandeep Singh being the first one. Gang Neha and gang Prince are on a roll with one of their team member in the Semi-Finals. Let’s see whether any member of Rannvijay’s gang or Nikhil’s could make it there or not.