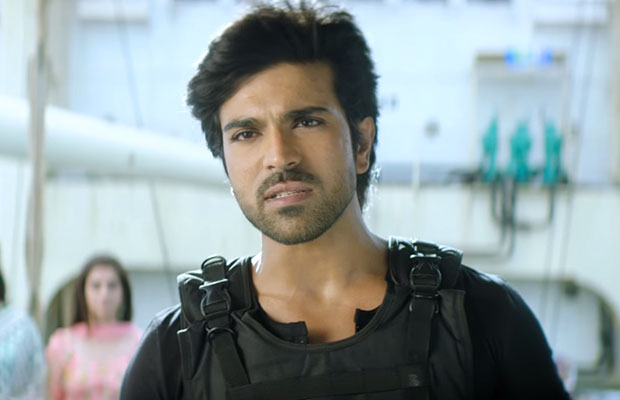 Telugu star Ram Charan’s upcoming action-romance drama ‘Bruce Lee- The Fighter’ is out with its trailer. The two minute trailer gives us the perfect blend of romance, action, drama and some more kick*ss action! ‘Bruce Lee’ apparently sees Ram Charan as a stunt choreographer which obviously means that the actor will be seen in a fit and fierce avatar. The trailer is impressive to the core with actress Rakul Preet Singh charming us with her glamorous persona.

Apparently the film is a family entertainer where the lead character is a huge fan of action master Bruce Lee. Ram Charan’s sister played by Kriti Kharbanda gets married to a really rich family soon after which the family faces some grave dangers. From the gist given in the trailer we can make out that a lot of terrorist and military activity has been involved in the film’s second half.

Ram Charan gives a whistle worthy dialogue where he states that once he starts with action, there is no interval, only climax! Well we’re surely waiting to see this film’s climax as superstar Chiranjeevi has promised a mind blowing surprise for all his fans. Ram Charan’s father Chiranjeevi has a small yet important cameo in the film which is suspected to be the climax of the film.

‘Bruce Lee – The Fighter’ has been directed by Srinu Vaitla and produced by DVV Danayya under the banner DVV. It also stars actors Tisca Chopra, Brahmanandam, Arun Vijay, Sampath Raj, Nadhiya, Brahmaji, Rao Ramesh and Amitash Pradhan. The film is set to release on October 15, 2015. With Brahmanandam’s entry in the film, we’re sure the audience is in for a good dose of laughter. Watch the trailer here and tell us what you like about it. Are you looking forward to watching Ram Charan’s Bruce Lee avatar?