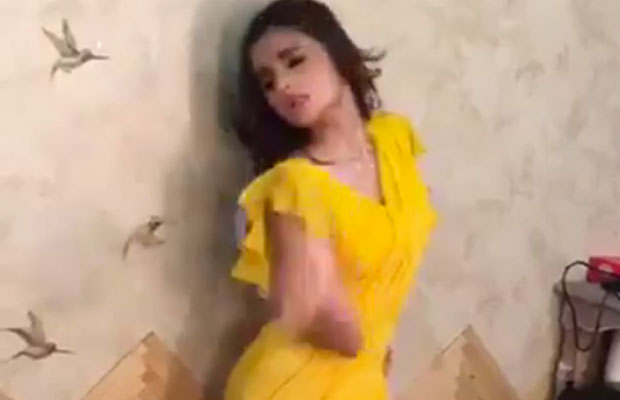 Akshay Kumar starrer Rustom is all set to release and hit the box office tomorrow. Akshay Kumar’s B-Town friends have been supporting him and promoting the film through different ways. Ranveer Singh danced to the tune of Akshay Kumar old song – Zeher Hai Ke Pyaar Hai Tera Chumma. Then Karan Johar shared a video of him pouting better than Akshay Kumar did in Dishoom. Sonam Kapoor posted a video where she told all her fans to watch Rustom. Sonakshi Sinha paid a tribute to Rustom while drumming the song Tere Sang Yaara. Sidharth Malhotra quoted a dialog of Akshay Kumar featuring his pet Oscar then Arjun Kapoor gave us four reasons to watch Rustom.

All these gestures were cute and sweet now we came across the hottest support which Akshay Kumar got from Alia Bhatt. Alia Bhatt draped in hot yellow saree looked sizzling hot. She danced to the tune of Akshay Kumar’s old song Tip Tip Barsa Pani which featured Raveena Tandon in the yellow saree. Alia Bhatt not only added hotness to the video she also some humour to it. As we can notice Alia Bhatt is also wearing the hat of a Naval officer and besides Alia, there is a person who is sprinkling water on the actress. In the middle of the video, the music stops and Alia Bhatt says “Why u watching me watch Rustom one day to go” and she starts dancing again. Have a look:

We loved this promotion of Rustom and even the reel Rustom aka Akshay Kumar enjoyed this performance of Alia and so he retweeted the video of Alia Bhatt again with the caption “After this act, you are sure to get a mandatory rain song in every film…Superb One Alia Bhatt” Check out:

After this act you're sure to get a mandatory rain song in every film 😜 Superb one Alia! #1DayToRustom https://t.co/fMmlNievtg

With Rustom getting a clash with Hrithik Roshan’s Mohenjo Daro tell us which film you wish to watch.