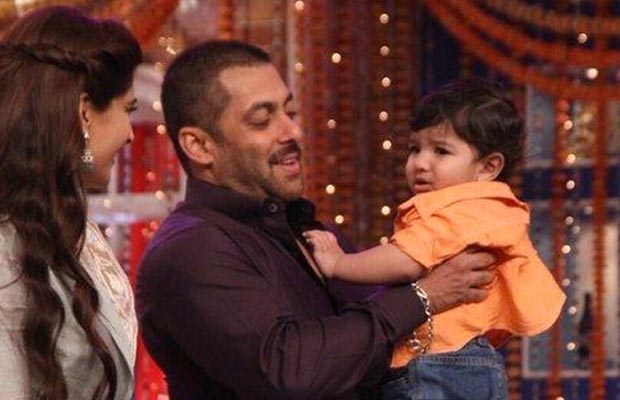 Salman Khan is one of the most eligible Bachelors of our film Industry. Every girl who has seen, worked or been around this super star hunk has fallen in love with him. Salman khan even in his late 40’s has the charm, the aura; the attitude and certainly a lovable personality which makes all girls go weak on their knees for him.

After a long gap of a decade and more we will finally see our Prem make a comeback with Rajshri Productions in ‘Prem Ratan Dhan Payo’.   The movie is highly anticipated because who does not love to see a soft romantic Prem romancing his on-screen love interests in a Mills and Boons fashion. Last night was very special night for his fans because we finally got a glimpse into the world of the new Prem. Nothing much has changed; it is a usual Sooraj Barjatya family drama with huge lavish sets and beautifully decorated stars.

Recently we caught Salman Khan with his super cute co-star Sonam kapoor on the sets of ‘Comedy Nights With Kapil Sharma’. The stars were there in order t promote their upcoming movie which releases this Diwali. There was a cute moment where we found a cute little angel wearing an orange shirt in the arms of Salman Khan. Salman is known to have a special bond and place for kids and he was super excited and happy to take the kid in his arms. The kid however was so tiny and young that he could not cherish the lucky moment and got cranky.

Well kiddo you were in a really lucky place and you missed it, you have no idea what any other girl will do and give to exchange your place. Mr. Dabaang looks like its high time you got married and have lots of kids.