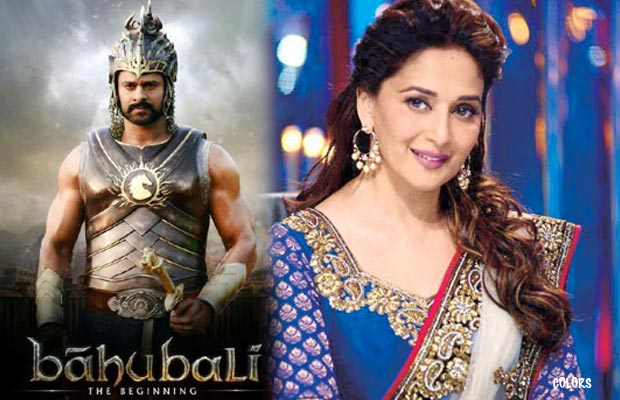 Bollywood diva Madhuri Dixit is apparently being eyed to play an important cameo in S.S. Rajamouli’s blockbuster hit’s sequel, ‘Baahubali 2‘. Apparently the makers of the film are looking to expand the horizon and include Bollywood stars this time in order to make the Hindi audience base stronger. As ‘Baahubali’ is a multi lingual film being released across the country in four languages, the scope of casting actors who are not really Telugu has also become wide for the filmmakers.

And now we hear that none other than Bollywood’s dancing queen Madhuri Dixit is being considered for a role in the film’s sequel, ‘Baahubali 2′. According to sources, it is Karan Johar, who has partnered up with team Baahubali for the film’s Hindi distribution, that talked to Rajamouli for casting faces from Bollywood in ‘Baahubali 2′. Apparently Madhuri Dixit is being considered to play the role of actress Anushka Shetty’s sister, a queen of Kunthala dynasty in the film.

Well it will definitely be a thrill to see Madhuri join team ‘Baahubali’! It is not a hidden fact that many actors have expressed their regret of not being a part of the ‘Baahubali’ franchise. Including Amitabh Bachchan, who after watching the film’s special screening was awestruck with the grandeur. Similarly South superstars like Rajinikanth, Surya, Chiranjeevi and others have also expressed how immensely proud they are of the film, and wished that they could be a part of it somehow.

Directed by S.S. Rajamouli, ‘Baahubali 2′ has been produced by K. RaghavendraRao, Shobu Yarlagadda and Prasad Devineni. Star cast of the film boasts of an impressive lineup including actors Prabhas, Rana Daggubati, Anushka Shetty, Tamannaah, Sudeep, Sathyaraj, Nassar, Ramya Krishnan and Prabhakar.  The film is set to release in four different languages namely Tamil, Telugu, Hindi and Malayalam. First half of the released on July 10, and the second half, ‘Baahubali 2′ is eyed for a June-July 2016 release.