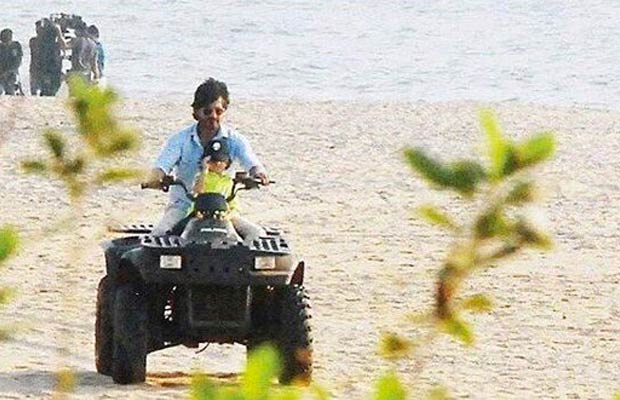 [tps_footer]Like always we got our hands on a video of Bollywood’s superstar Shah Rukh Khan’s little bundle of joy, AbRam. Shah Rukh Khan as we all know is head over heels for his little son AbRam and the actor was recently spotted spending some time with his son in Goa.

Shah Rukh Khan, who is shooting for Gauri Shinde’s next with Alia Bhatt, was spotted spending some time with his adorable son. While the makers of the film were busy searching the right location, SRK took AbRam on a joy ride.

AbRam who is with his father Shah Rukh Khan in Goa is the overdose of cuteness and is seen quad biking with the his daddy. The super cute AbRam looks all engrossed while he is sitting on the bike with Shah Rukh Khan. Adjusting his cap, AbRam is all enjoying his mini ride with daddy on the beach and its truly adorable!

AbRam’s presence has always been making news for his adorable stints. The cute bundle of happiness made headlines when he always accompanied by daddy SRK. Must say this little boy is already a favorite of the lenses like father Shah Rukh Khan.

Talking about Gauri Shinde’s next starring Shah Rukh Khan and Alia Bhatt, the film will see the two stars sharing the screen space for the first time. Produced by Karan Johar, the film sees Shah Rukh and Dharma Productions’ coming together almost after a gap of five years, the last one was ‘My Name Is Khan‘ which released in 2010.

Here’s hoping for the real treat from Shah Rukh Khan and Alia Bhatt![/tps_footer]