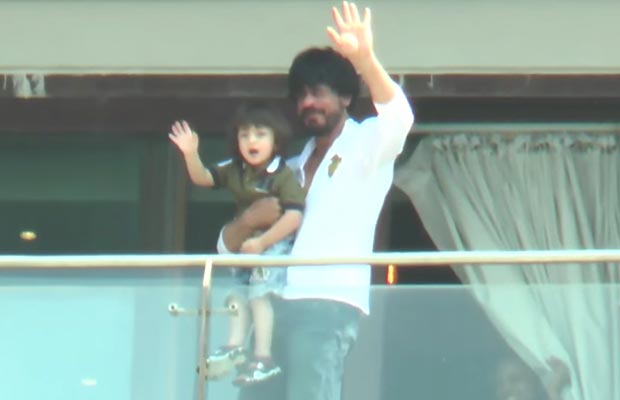 Referred as ‘Baadshah of Bollywood’, Shah Rukh Khan has struggled a lot to be the most successful actor he is. He is a man of struggle, success, charm, passion, sadness and full of life. From nobody to biggest man in Bollywood, Shah Rukh Khan’s success story is like no else’s as we all know and moreover anything the actor never forgets to thank his fans for being a big part of his success.

Celebrating his 50th birthday, Shah Rukh Khan greeted his hundreds of fans outside his Mannat house last night. SRK who first cut the cake with wife Gauri, children Aryan and Suhana, later stepped out in the balcony to wave and thank his fans for their love and special wishes. The crazy fans stood till midnight to catch the glimpse of their favourite actor on his 50th birthday. The fans brought huge cakes, banners, special messages and lots of things for the actor.

Early today, Shah Rukh Khan again came out in the balcony, but this time with his little bundle of joy AbRam, Both AbRam and Shah Rukh Khan were seen waving the crowd and it’s the most adorable view that you shouldn’t miss it.

Take a look at the adorable pictures of Shah Rukh Khan and little son AbRam!