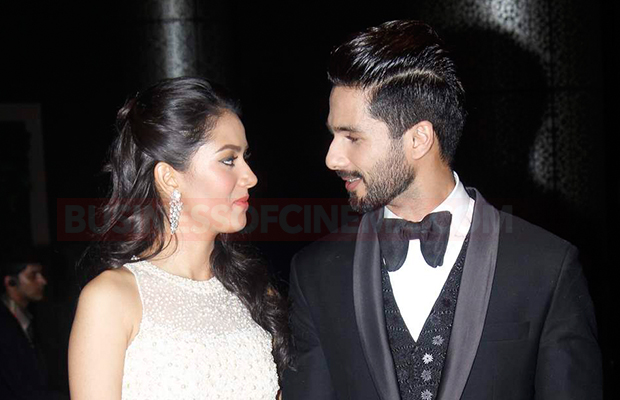 [tps_footer]Shahid Kapoor is already brain storming for his first Valentine’s Day with wife Mira Rajput. The handsome hunk who is busy with back to back projects is not going to let this special day go. The workaholic actor is undoubtedly too excited to celebrate this day with great oomph. Shahid who is now and then spotted with wife Mira on secret outings has planned something adorable.

Recently during a press meet, the Shaandaar actor was asked about his plans for the Valentine’s Day. The highly talented actor replied saying, “I will do some lovey dovey stuff on Valentines Day”. Yes! lover boy Sasha has already planned for a mushy Valentine’s Day for wife Mira.

Not dwelling much into the details, the actor blushed giving hints that this year is going to be high on love and romance. Shahid Kapoor is currently busy with Vishal Bhardwaj’s film ‘Rangoon’. The historic drama is set in the backdrop of World War II and also stars actors Kangana Ranaut and Saif Ali Khan in lead roles.

Shahid’s look from the film ‘Rangoon’ has already leaked out, the handsome lad is expected to be seen in a uniform clad avatar. The star is already seen engrossed in his character from the film with the moustache.

Other than ‘Rangoon’, Shahid Kapoor will also be seen in the sensitive film ‘Udta Punjab’. The film stars Alia Bhatt, Diljit Dosanjh and Kareena Kapoor Khan. Shahid who has always been mum about his personal life is lately giving all the adorable replies for his marital life.

Talented actor Shahid and gorgeous wife Mira Rajput are surely giving relationship goals to all. We can’t wait to see what Sasha does to impress his lady love on Valentine’s Day![/tps_footer]