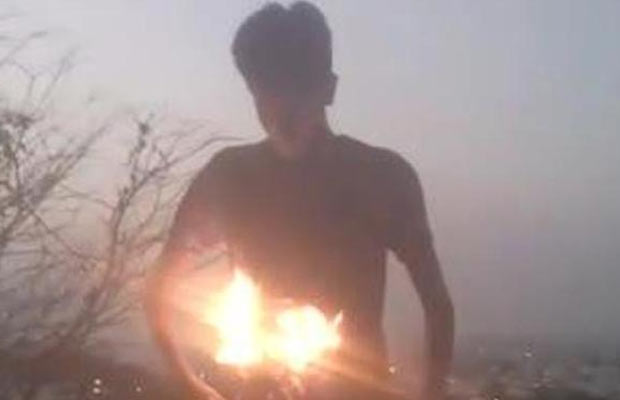 [tps_footer]A gentle caution was ignored and this 19-year-old boy Mohammed Jalaluddin, who aspired to become a reality TV star died after his serious stunt went wrong. The wannabe TV star died after he suffered severe burns while performing a fire stunt at Falaknuma in the Old City of Hyderabad on Sunday.

The 19-year-old boy wanted to perform a fire stunt and then take off his shirt when he is on fire but the stunt terribly went wrong, which led to his death. His friends who were present with him at that moment recorded the whole stunt on the cell phone as the fire trapped the boy badly. He was immediately rushed to the nearby hospital where he died on Sunday.

Reportedly, the boy was inspired by reality shows and wanted to participate in the show by doing some adventurous stunts but little did he know that it was at the risk of his life. In his dying declaration, the boy said that he did not inform his parents about this and that he saw some stunts on some reality show, which left him inspired to do this. He also said that he wanted to perform a daredevil act.

On Thursday afternoon, Mohammed Jalaluddin made an impromptu plan to perform fire stunts and wanted to prove himself a hero in front of his friend circle. After borrowing kerosene from the neighborhood, the boy took his friend to some ‘pahad’ and performed the stunt there. He handed his phone to his friends and asked them to record his stunt so that this footage can be sent for the audition of the reality show.

Well, the stunt went wrong, which led to an unfortunate death of the boy who wanted to participate in a reality show. After receiving 60 per cent burn, he could not survive for long.