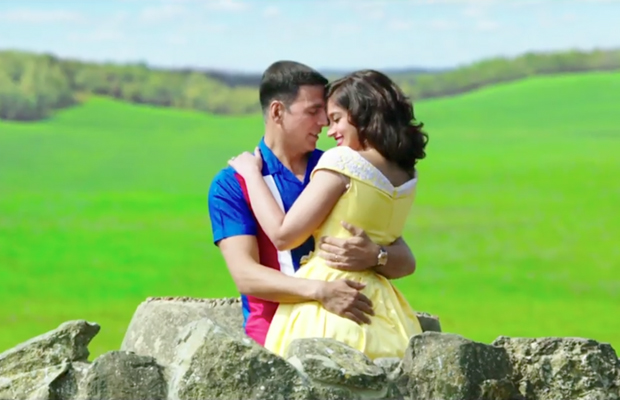 [tps_footer]Akshay Kumar who is lately experimenting with many genres will soon be seen in ‘Rustom’. The trailer of the film is marvelous and Akshay is nailing his character by all means. The intriguing film also stars actresses Ileana D’Cruz and Esha Gupta in lead roles.  The masses are loving the mystery filled first glimpse already and first sneak peek of the song from the film is now out.

‘Rustom’ is based on true incidents. The film is going to be full of twists and turns but it also has a hint of romance. Akshay is paired opposite Ileana D’Cruz and the two are surely complimenting each other. The film is inspired by the Nanavati case. The Khiladi star who is fit and steady is doing justice to his naval officer role.

After the intense trailer, Akshay Kumar has released the teaser of the song Tere Sang Yaara. This is the first song to be released from ‘Rustom’. The track is too romantic and melodious. With scenic locations and heartwarming lyrics, this track is surely going to be one of the most adorable songs.

The chemistry between Akshay and Ileana is spot on. The full track will be released tomorrow. Tere Sang Yaara is crooned by Atif Aslam. The track features Akshay in a romantic mood trying to impress Ileana.

‘Rustom’ is directed by Tinu Suresh Desai. The film is all set to hit the screens on August 12th, 2016.[/tps_footer]