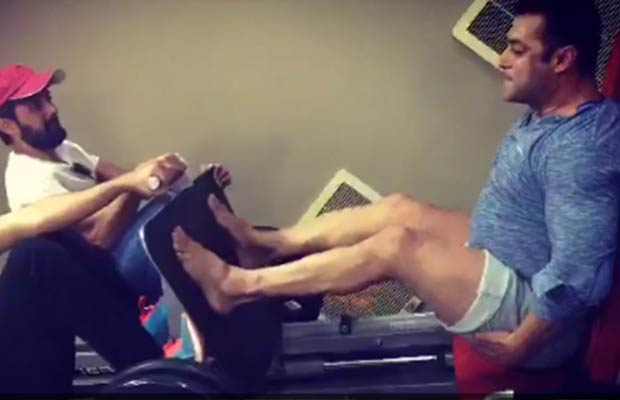 [tps_footer]Bollywood actor Salman Khan is known for his action films. The actor is currently prepping for the highly anticipated film ‘Sultan’. Produced under YRF banner, ‘Sultan’ is one of the most difficult movie for Salman Khan.

Salman Khan has gained a lot weight to look a professional wrestler in the film. The actor has been training hard under professionals. He is slated to do most of his stunts by himself. Few hours ago, director of ‘Sultan’ Ali Abbas Zafar shared a clip of Salman on his twitter account. The clip shows the actor training for his role. He is seen doing the legs workout while being helped by two trainers. The trainer takes the count while Salman is doing the workout. Wearing grey T-shirt and shorts, the actor was smiling while training.

Salman will have two different looks in the film which probably means that the story will show two timezones. The superstar has been training under stunt professional Larnell Stovall and his team. The actor will also be seen doing stunts on horse after some pictures were leaked from the sets of him learning horse riding.

Directed by Ali Abbas Zafar, ‘Sultan’ is about a wrestler, Sultan Ali Khan, a three times state champion from Haryana, for whom wrestling is more than just a sport. As Sultan Ali Khan, Salman not only has to be muscular, he is also required to sport a rugged look. It also stars Anushka Sharma, who will also try her hands ion action. She is also prepping to wrestle in the movie and training hard for it. The movie is scheduled to release on Eid this year.