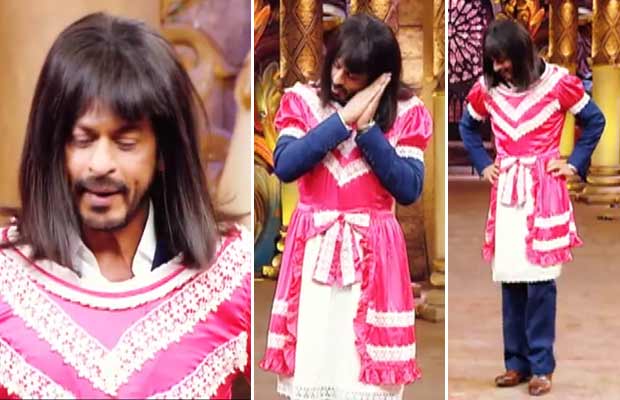 [tps_footer]Bollywood actor Shah Rukh Khan has geared up with the promotions of his upcoming film ‘Fan‘, which is releasing on April 15. The actor will be seen promoting the film on the various television shows and will be seen on Comedy Nights Bachao too.

King Khan had the best ‘Fan’ moments full of laughter, fun, and entertainment on Comedy Nights Bachao. The makers of the show released the promo, where SRK is seen in a girly avatar with comedian Bharti Singh and his avatar is extremely hilarious. Dressed in a pink frock, SRK’s girly avatar is bound to leave you in splits.

Not only that, as we all know Shah Rukh Khan is King Of Romance and so the actor will be seen mouthing the most romantic line ‘Teri aankhon ki namkeen mastiyan’ from his film ‘Jab Tak Hain Jaan‘ along with his signature pose that will make you all go weak on your knees.

It’s all about a die-hard fan who can go to any extent to express its emotion for his superstar. Directed by Maneesh Sharma, the trailer of the film looks promising yet intriguing and now the film is surely worth a wait.

You'll be left wanting more after this hilarious clip of @iamsrk & @bharti_lalli from #ComedyNightsBachao!https://t.co/nlhDLUc8ka