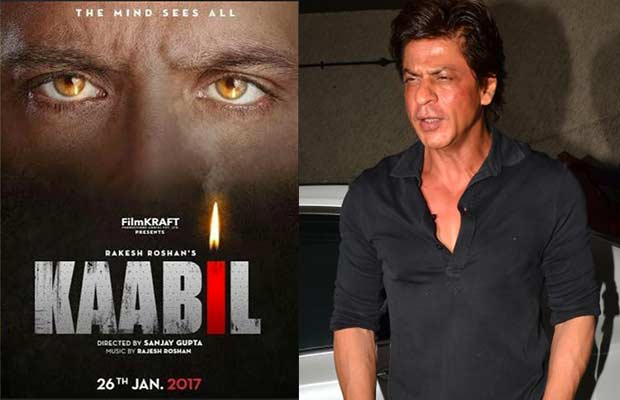 [tps_footer]After shifting his release date from this year Eid to avoid the clash with Salman Khan’s Sultan, Shah Rukh Khan decided to release his next much-talked film Raees to next year. The superstar had planned to shift his film Raees release date to 2017 but coincidently, Hrithik Roshan’s home production film Kaabil is also releasing at the same time. The clash between Kaabil and Raees has become a talk of the town.

Well, box office clash has never been profitable for makers of the film and so Shah Rukh Khan decided to directly talk with Rakesh Roshan in order to avoid the clash. Recently SRK and filmmaker Rakesh Roshan had a meeting over it. Reportedly, they discussed how they could avert their respective films, ‘Raees‘ and ‘Kaabil‘ clash.

Last night at the screening of Irrfan Khan’s Madaari, Shah Rukh Khan was asked about his meet with Kaabil makers. SRK seemed to be in no mood to talk about it and said, “Itne raat ko itna heavy sawaal mat poocho, ask me some light questions (It’s late night, ask me some lighter questions)”.

Later another reporter tried to ask the same thing and once again the actor got irritated. “Tuje lagta hai mai baat karunga, kya chances lagta hai (Do you think I will talk about, what are the chances”, he said this and walked ahead.

Well, post his meet with Roshans, the Dilwale actor seems to be little disappointed and his recent reaction has totally shocked us. Reportedly, Roshan is adamant on the fixed release date and will not alter it by any chance. So, we will witness the cash of titans at the box office next year on January 26? Tim will tell better!