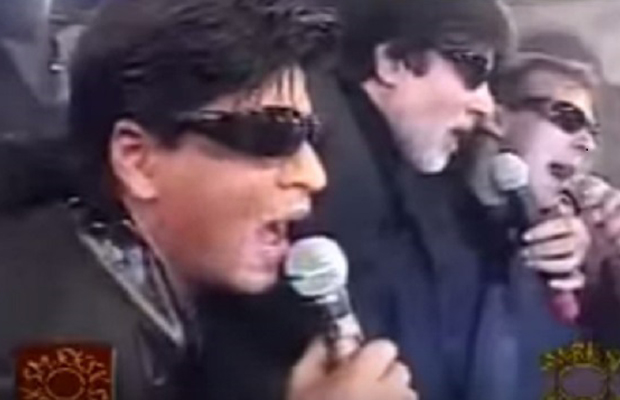 [tps_footer]There was a time when Bollywood’s top stars Shah Rukh Khan, Salman Khan and Amitabh Bachchan bonded together like best buddies. The way these people showed off their friendship earlier, is surely not to be missed. Salman and SRK’s friendship has always been the talk of the town, but its more surprising to see Big B joining them.

We got a rare seen vintage video where Shah Rukh Khan, Salman Khan and Amitabh Bachchan are seen singing together like crazy. All the three tops stars of now and then, had set the stage on fire with their singing. SRK and Salman who were thick friends before as well, are seen crooning to the glory with Big B.

With matching suit, sunglasses and dancing like crazy, the three conquered the stage. We don’t remember which this event was, but SRK, Salman and Amitabh Bachchan just nailed it. Believe it or not, you must have not seen all the big stars on the same stage singing their lungs out like crazy.

Those were the good old days! Agree?