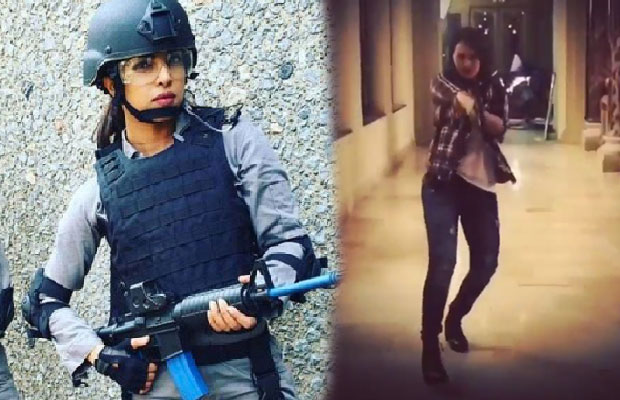 Highly talented actress Priyanka Chopra has successfully made her American TV debut with the series ‘Quantico’. The serious drama has already premiered on channel ABC on Sunday i.e. September 27. Well, just after a day of commencement, Priyanka seems to be gaining laurels for her role in the drama series.

Dabangg actress Sonakshi Sinha who is always head strong and loves carrying off daredevil roles is all impressed with Priyanka. The talented actress Sonakshi seems to be head over heels for PeeCee. The ‘Akira‘ actress took to the micro blogging site Twitter and posted a video of her doing an action sequence inspired by Priyanka’s ‘Quantico’ image.

The amazing spontaneous diva Sonakshi captioned the video saying, “5 days to go for Quantico! Homegirl @priyankachopra making us proud, so this was the least i could do!”

Well, looking promising in the shoes of an action girl Sonakshi surely turned heads with her dare devil image. Both Priyanka and Sonakshi with this amazing gesture rubbish the saying that Bollywood beauties can never be friends.

Marvelous actress Priyanka also couldn’t stop her smiles and replied to Sonakshi saying, ‘OMG that’s fabulous!We need to get u on the show @sonakshisinha  Thank U for this!Big hug #Quantico @StarWorldIndia .” 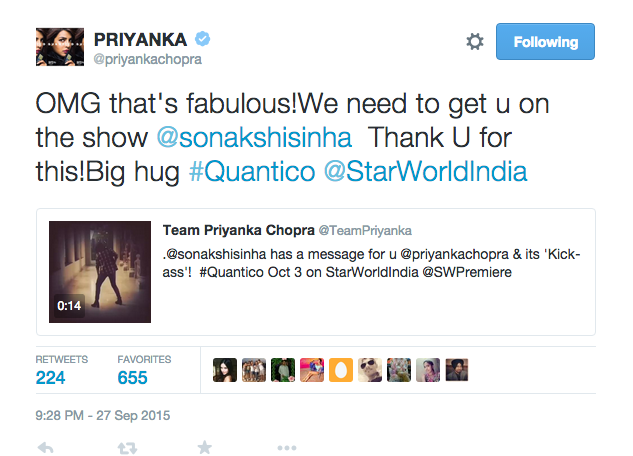 Playing the role of Alex Parrish Priyanka is gaining positive reviews for her television debut, the pilot of the series has already gained large number of views and most of the reviews say that ‘Quantico’ is worth a watch. The series will soon entertain the Indian audience too.

Quantico is a serious drama which will depict the lives of FBI recruits who have arrived at the Quantico base for training. Things take an ugly turn when one of the recruits is accused of being the mastermind behind the 9/11 terror attacks.