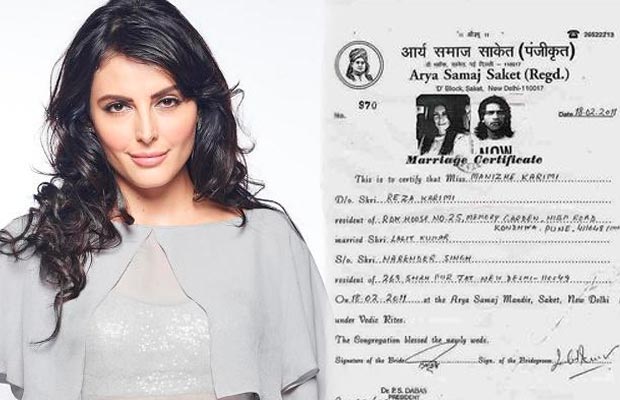 The current center of attraction of ‘Bigg Boss 9 Double Trouble’ is none other than Iranian model Mandana Karimi. Mandana Karimi who was last seen in the film Bhaag Johnny, is gaining attention since she entered the Bigg Boss 9 house.

The actress became the talk of the town due to her debatable marital status and digging out more about her secret marriage, a marriage certificate has made its way on the internet which claims that she was secretly married to model Lalit Tehlan. The leaked marriage certificate shows that the duo had an Arya Samaj wedding dated 18/2/2011.

Mandana‘s birth name is Manizhe Karimi, which is also seen on her leaked marriage certificate. Even her twitter handle shows the same name Manizhe. Reports, also suggest that they parted ways and their ‘marriage’ too was over once Mandana‘s permit issues were sorted.

Well, possibilities are there that it might have been fake marriage just to get Indian visa or any of such benefits. Reportedly, it claims that Lalit Tehlan is gay as designer Rohit Bal was spotted cosying up with him at fashion event this year.

Rumour mills are also a buzz that currently Mandana is dating Gaurav Gupta from last few months but yet there is no commitment by Mandana anywhere about it.