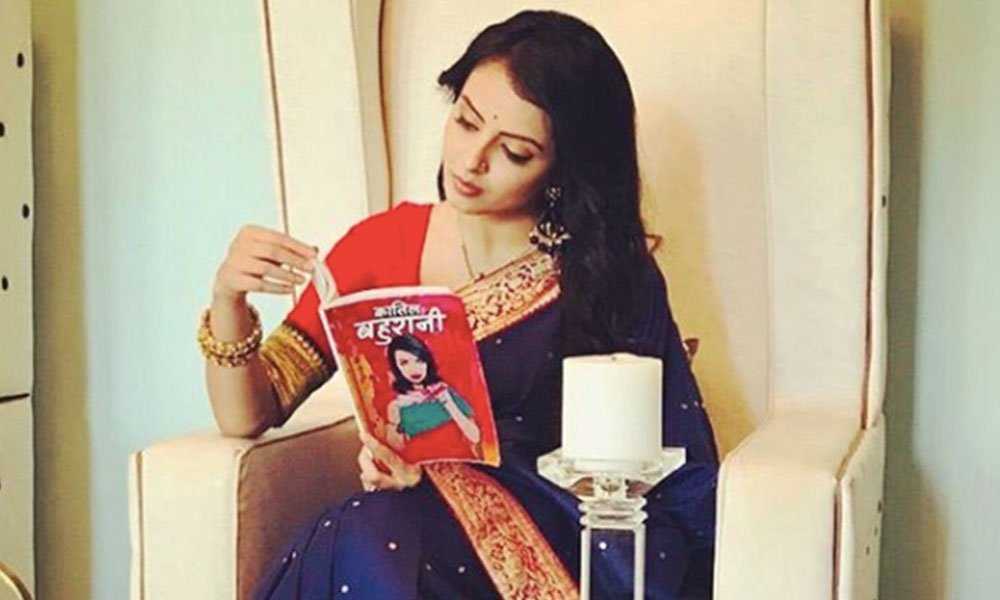 Janhvi Mittal of Ek Bhram- Sarvagun Sampanna is leaving no stone unturned to get the best to her audience with her new show. After engaging with her fans over a fun exchange yesterday, Janhvi posted a new picture on her social media, reading a book and we surely can’t wait to get hold of this ‘Kaatil Bahuraani’ book!

Seeming completely consumed and dressed in a vibrant blue saree, Janhvi is seen reading the book ‘Kaatil Bahuraani’, hinting at the Sunday preparations that have gripped the Mittal bahu to play the ideal bahu when the show kicks off on the national television, tomorrow.

Yesterday, Janhvi Mittal had taken over the social media with an interesting activity #AakhriSaas. The campaign comes as a breezy yet interactive engagement of the character, Janhvi with the netizens through her Instagram and Twitter handles, where she is inviting ideas from them to trouble her mother-in- law, hinting on the bitter-swweet essence of the relationship.

Earlier, Shrenu had shared the new promo of her upcoming show on social media. Her fans were surprised to see her in a different avatar as she has always played the perfect and ideal bahu, over the years.

With the promotions, the makers were successful in building on the anticipation around the show and the never-seen- before avatar of Janhvi, essayed by Shrenu, who has been a household name on the television screens with her previous shows like Iss Pyaar ko Ka naam dun, Ishqbaaz to name a few. Apart from Shrenu, Zain Imam will also be seen playing the lead role in the upcoming show.

To kick off the first leg of promotions, Shrenu was seen seeking blessings at the culturally rich heritage ,1000 years old Saas Bahu Temple in Udaipur, Rajasthan, amidst the whirlpool of media and received wide appreciation for the initiative of bring the forgotten temple to the light of the day. The character Janhvi Mittal is all over the social media, holding the attention of the paparazzi for being the namesake to Janhvi Kapoor- drawing comparisons, polling on looks and loving them both with the hashtag #JanhviVsJanhvi.

The show is set to air on national television, Star Plus at 7 pm, Monday to Friday and with this new glimpse of preparation over Kaatil Bahuraani book, everybody is excited!