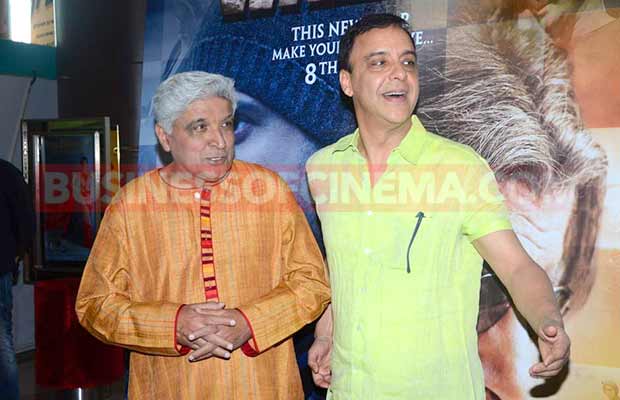 [tps_footer]Bollywood actor Farhan Akhtar along with Neil Nitin Mukesh and actress Aditi Rao Hydari unveiled the trailer of their upcoming movie, ‘Wazir’ earlier today. Along with the actors, director Bejoy Nambia, producer Vidhu Vinod Chopra and lyricist Javed Akhtar were present at the launch too. Writers of the movie, Rajkumar Hirani and Abhijat Joshi, were also snapped at the launch event.

Megastar Amitabh Bachchan was seen missing from the trailer launch. Wearing a jacket and a hat, Farhan looked good in beard. Aditi was seen wearing a white Kalidar by Anand Kabra that she paired with silver necklace and a cuff by Aquamarine. She tied her hair and kept her make simple that added finishing touch to her outfit. Neil wore a grey jacket, checkered shirt and a vest.

After the trailer launch, the team of the movie interacted with media. Farhan stated that he was blown away when he read the script. He said that, not just in the movie, but in real life he loves to play chess as well. He is very competitive and he does not go down without the fight. He said playing an army officer and shooting sequences were one of a kind experience. Not revealing much about his character, Neil said that playing a role of a villain had its own challenges. Aditi told the media that she felt privileged and blessed to have been a part of such and great cast and movie. Vidhu Vinod Chopra stated that that the writers, Rajkumar Hirani and Abhijat Joshi, are the backbone of the movie. Lyricist Javed Akhtar recited poem that truly defined what ‘Wazir’ was all about.

‘Wazir’ is a story of Danish played by Farhan Akhtar, who is an Army officer and Onkar Nath Sharma (Amitabh Bachchan), a paralyzed chess grand master. The two are set out to unravel a murder mystery. Amitabh Bachchan and Farhan look powerful in their characters. Aditi plays Farhan’s wife in the movie whereas Neil Nitin Mukesh is seen playing a grey shade and has different layers etched to his character. The movie will hit the theatres on January 8th, 2015.[/tps_footer]