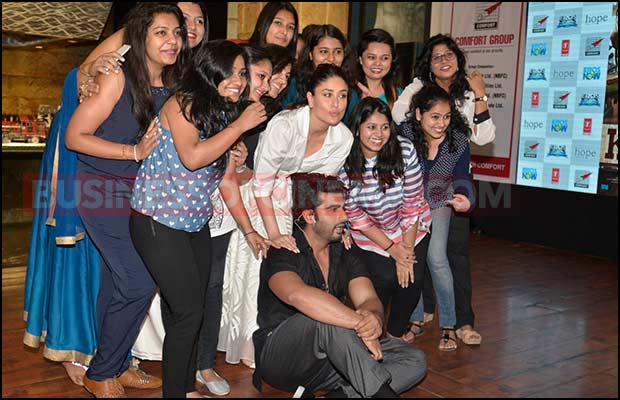 [tps_footer]On International Women’s Day, Bollywood stars Arjun Kapoor and Kareena Kapoor Khan released ‘Most Wanted Munda’ song from their upcoming film Ki & Ka. Releasing the song on the most perfect day, the song showcases that Arjun Kapoor who plays the role of house-husband in the film, is the most wanted guy for every women.

The song launch event was exciting yet full of entertaining as the ‘Tevar’ actor cooked omelette for his on screen wife Kareena and other women’s present there. Kareena and Arjun, who are sharing the screen space for the first time for their upcoming film ‘Ki and Ka’, were clicked having a fun time together. Arjun Kapoor was also seen dancing crazily along with the ladies. Both Kareena and Arjun Kapoor had their best time cooking and dancing crazily like never before.

Director R Balki has brought a story, which actually sets a new benchmark for the modern married couples. The film is about a gender reversal of stereotypes and both the actors Kareena-Arjun are portraying totally different looks in the film. The film is slated to release this year on April 1.[/tps_footer]