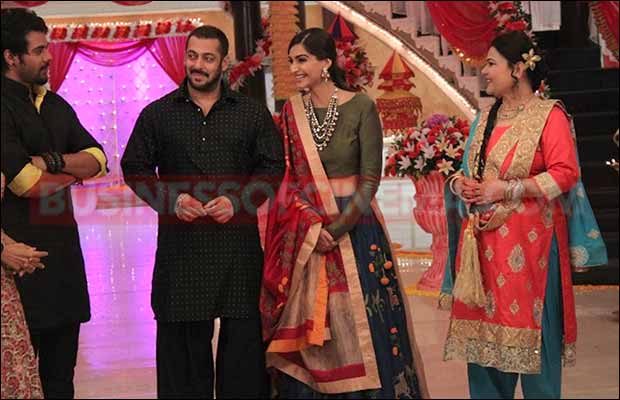 [tps_footer]Bollywood actors Salman Khan and Sonam Kapoor are leaving no stone unturned to promote their upcoming film Prem Ratan Dhan Payo. After promoting the film at Amity University, Noida where thrilling crowd appeared to catch the glimpse of the actor, Salman and Sonam now visit on the sets of the television daily soap ‘Kumkum Bhagya‘.

Both Salman and Sonam who visited on the sets of ‘Kumkum Bhagya‘ had a great fun with the actors on the show. ‘Kumkum Bhagya‘ actors Shabbir Ahluwalia, Sriti Jha, Shikha Singh aka Alia and others were seen interacting and clicking selfies with the Being Human star.

Dressed in black and black pathani, Salman Khan looked dashing while actress Sonam Kapoor looked elegant in tribal print lehenga with a full sleeves blouse and red duppatta. She finished out her look with side-parted hairdo.

Well, gear up guys Salman Khan is now coming on your favourite television show in the Diwali special episode which would be aired soon. Not only that, the Bajrangi Bhaijaan actor will also be seen making Abhi realise his love.

Along with the preparations for his film Sultan, Salman Khan is on the promotion spree for PRDP, which is releasing on November 12. The actor will also be seen entertaining and tickling funny bones of the audiences with his witty sense of humours on Comdey Nights With Kapil this week