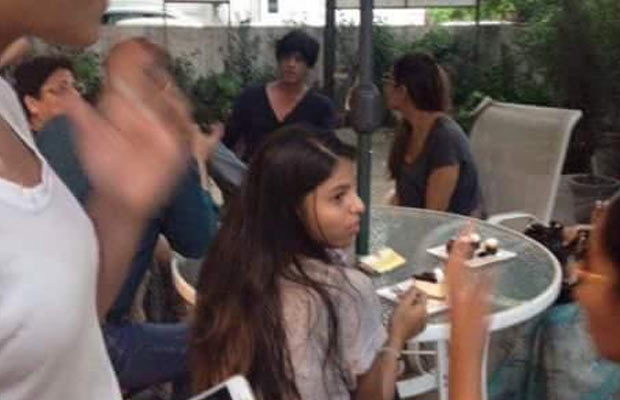 [tps_footer]Despite of his busy shooting schedules, Bollywood’s superstar Shah Rukh Khan never fails to spend some quality time with his family. The actor who is very much attached with his three little kids, was recently spotted spending some time with them.

SRK who is always busy with the shootings, made sure to take sometime for his family before moving to Gujarat for the shooting of his upcoming film ‘Raees’. We got our hands on the pictures of SRK having a good time with his family on a lunch outing. Glimpses of Shah Rukh Khan’s family moments are showing us where the actor’s priorities belong.

One can easily see SRK sitting beside his wife Gauri Khan while little AbRam is sitting with a family member next to them. In the other picture, SRK’s daughter Suhana is seen facing her back while interacting with someone. Though Aryan Khan is missing from the family picture, it seems its a perfect and lovely family in one frame.

Currently, Shah Rukh Khan is shooting for his next film ‘Raees’ in Bhuj, Gujarat. Talking about the film, directed by ‘Raees’, the film has an interesting story which tells the story of a bootlegger, whose business is thwarted by a policeman. The movie also stars Nawazuddin Siddiqui, Pakistani actress Mahira Khan in the lead role. The film is schedule to release next year on Eid.[/tps_footer]