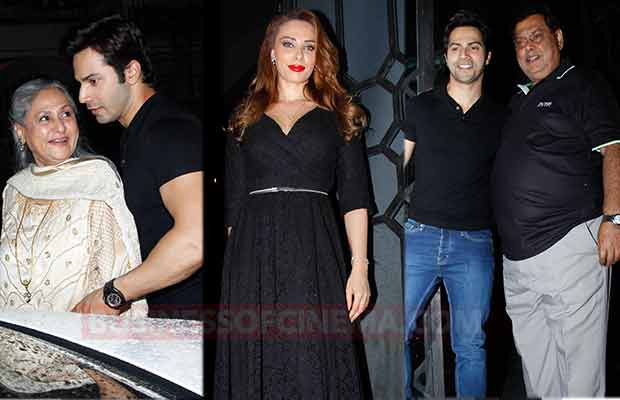 It was Varun Dhawan’s mother Karuna Dhawan’s birthday bash where stars like Iulia Vantur and Jaya Bachchan were snapped.

The Bollywood actor Varun Dhawan had a special party for her mother Karuna Dhawan who completed another year of her life. On her birthday, her son Varun and husband David Dhawan had organised a special birthday bash, where we snapped a few other stars from B-town.

Amongst all the guests the lady who caught our attention was Salman Khan’s alleged girlfriend Iulia Vantur. The Romanian actress was looking simply stunning in the black gown, which she had minimally accessorized with small-drop earrings and a pendant. Iulia was looking like a diva in the outfit, with her lips painted red.

Another star who caught our attention was Amitabh Bachchan’s wife and the veteran actress Jaya Bachchan. She was spotted adorning a traditional outfit with golden embellishments. Jaya was looking quite cheerful at the party as Varun was seen escorting her to the car.

On the work front, Varun Dhawan is currently busy in shooting Judwaa 2. The film also stars Taapsee Pannu and Jacqueline Fernandez. Directed by David Dhawan, the film is a sequel to Salman Khan’s 1997 release Judwaa. Superstar Salman is also being reported to have a cameo in the film.