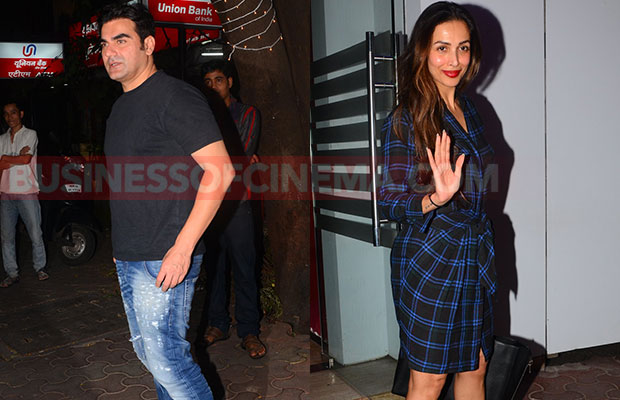 The year 2016 seemed not so good with the couples in Bollywood. Many lovebirds had a breakup and few even parted their ways after their successful marriage. One such couple Malaika Arora Khan and Arbaaz Khan stunned the people when they decided to split. The duo had initially issued a joint statement and said that they have taken break from their marriage to know themselves better. However, none of the two have confirmed their divorce and the two are just living separately for some time. Recently the couple reunited together for a family dinner in a restaurant in Bandra. The couple was seen along with Amrita Arora and her hubby Shakeel Ladak.

Malaika was recently in New York for an event and now she’s back in India. The couple were seen in their jovial mood and even posed for the shutterbugs. Malaika looked gorgeous as always in a blue and black colored checkered shirt dress with ankle length open-toe booties. The Dabangg 2 director was seen in the casual tee and jeans.

According to the reports, after the dinner, the couple departed in the separate cars as Arbaaz and Amrita left together while Malaika left in her own car. We hope that this ex couple get back together and sort out their differences keeping the misunderstanding aside.

Let’s wait what the couple officially announces about their relationship status in the future.